Canoe River is the most northern tributary of the Columbia River in British Columbia, Canada. Its lower reach is flooded by Mica Dam. The lower Canoe River is called Canoe Reach, part of the Mica Dam's reservoir, Kinbasket Lake. 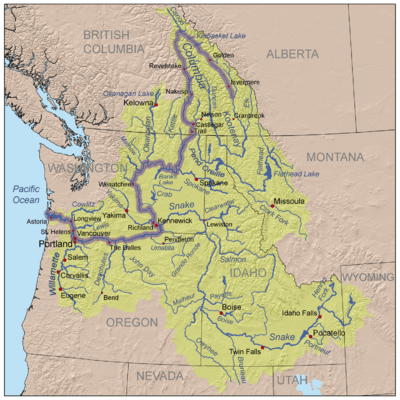 Map of the Columbia drainage Basin with the Columbia River highlighted and showing the major tributaries. The Canoe River, its northernmost tributary, joins the Columbia at the Big Bend where the river turns south.

Most of Canoe River, in the form of Canoe Reach, occupies the Rocky Mountain Trench, the same valley as the upper Fraser River and its tributary the McLennan River, which reaches to Valemount. The Canoe River and Camp Creek, one of its main tributaries, drain a region just north and east of the headwaters of the North Thompson River.

The Canoe River was named by David Thompson, who spent the winter at Boat Encampment near the river's mouth in 1811. From the early 1820s until 1846 the Canoe River was a well-travelled section of the York Factory Express HBC overland trade route between London via Hudson Bay and the lucrative Columbia District fur region headquartered at Fort Vancouver on the north bank of thelower Columbia River.

The river was the site of a rail crash, near Valemount, British Columbia, in 1950. 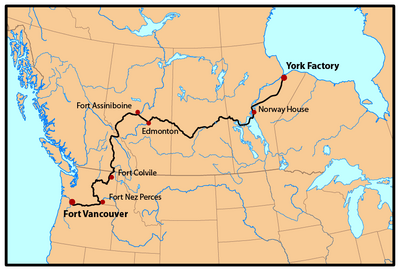 Map of the route of the York Factory Express, 1820s to 1840s. Modern political boundaries shown.

All content from Kiddle encyclopedia articles (including the article images and facts) can be freely used under Attribution-ShareAlike license, unless stated otherwise. Cite this article:
Canoe River (British Columbia) Facts for Kids. Kiddle Encyclopedia.