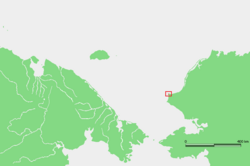 Cape Lisburne is a cape located at the northwest point of the Lisburne Peninsula on the Chukchi Sea coast in Alaska. It is 40 miles (64 km) northeast of the village of Point Hope, Arctic Slope. It is a part of the Chukchi Sea unit of Alaska Maritime National Wildlife Refuge.

The first European to sight this cape was James Cook. He named it on August 21, 1778 and wrote: "The southern extreme seemed to form a point which was named Cape Lisburne."

An early Inupiaq name for the cape was "Uivaq," generally spelled "Wevok" or "Wevuk". Cape Lisburne was often referred to as "Uivaq Ungasiktoq" meaning "distant cape" as opposed to "Uivaq Qanitoq" (Cape Thompson) meaning "near cape."

The native Inupiaq who lived there were struck by an epidemic and many died along with a Methodist missionary and they are buried next to the mountain cliffs. The survivors moved to Point Hope but return each summer to hunt caribou and collect bird eggs from the cliffs,

The U.S. Air Force has a long range radar and communication station there that is part of the DEW Line network of radar sites along the Alaska North Slope.

All content from Kiddle encyclopedia articles (including the article images and facts) can be freely used under Attribution-ShareAlike license, unless stated otherwise. Cite this article:
Cape Lisburne, Alaska Facts for Kids. Kiddle Encyclopedia.