Carabost is a foresting community in the south-east part of the Riverina. It is situated about 16 kilometres north west of Rosewood and 22 kilometres south east of Kyeamba. 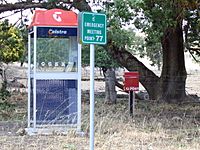 Carabost can be found on the Tumbarumba Road near the location of the Carabost National Forest - a large Pine Plantation in the area. The only facilities available in the area, other than the Carabost Town Hall built in 1927, and a Fire Brigade Shed, is a public telephone box and a post box - both at the same location as the district emergency gathering point which is used in the case of forest fire or similar emergency.

Carabost is the Gaelic form of Carbost on the Scottish island of Skye and means Copse farm.

Gold was known to exist in the area, from at least the late 1880s, but Carabost was not as well known for gold, as the neighbouring mining areas of Humula and Tumbarumba. During the 1920s, parts of the locality of Carabost were mined for gold by dredging.

All content from Kiddle encyclopedia articles (including the article images and facts) can be freely used under Attribution-ShareAlike license, unless stated otherwise. Cite this article:
Carabost, New South Wales Facts for Kids. Kiddle Encyclopedia.