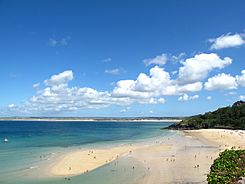 Carbis Bay (Cornish: Porth reb Tor, meaning cove beside the eminence) is a seaside resort and village (Cornish: Karrbons, meaning causeway) in Cornwall, UK. It lies one mile southeast of St Ives, on the western coast of St Ives Bay, on the Atlantic coast. The South West Coast Path passes above the beach.

Carbis Bay is almost contiguous with the town of St Ives and is in St Ives civil parish (part of the area served by St Ives Town Council), which encompasses St Ives, Carbis Bay, Lelant and Halsetown. The 2001 census gave the combined population of Carbis Bay and Lelant as 3,482. Lelant, an older settlement which is one mile to the south-east, Carbis Bay and St Ives are linked by the A3074 road which joins the A30 at Rose-an-Grouse. Carbis Bay railway station, above the beach, is one of five railway stations on the St Ives Bay Line which joins the mainline at St Erth railway station, which is also at Rose-an-Grouse. St Erth station is the junction for the main line to London Paddington.

Carbis Bay overlooks the small bay of the same name (part of St Ives Bay) which is bounded to the north by Porthminster Point and to the east by Hawk's Point and contains a popular family beach. Hawk's Point is within the Hayle Estuary and Carrack Gladden Site of Special Scientific Interest (SSSI) and in the Victorian era was known locally for its pleasure grounds. The garden had a tea house, grotto and was a venue for Sunday School outings, Band of Hope galas, etc. By 1880 the proprietor, William Payne, claimed in an advertisement that it was ″the largest establishment of the kind in the West ...″.

Wheal Providence mine in Carbis Bay is the type locality of the rare mineral Connellite. 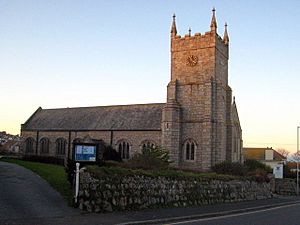 The parish church, which is dedicated to St Anta and All Saints, contains a peal of ten bells. This was the largest peal in a Cornish parish church until St Keverne's bells was increased to ten in 2001. The Carbis Bay Hotel, on the seafront, was built in 1894 by Silvanus Trevail. Behind the village stands the Knill Monument, known locally as "The Steeple", a 50-foot (15 m) high monument to John Knill, a mayor of nearby St Ives during the 18th-century.

Carbis Bay is connected to the national railway network using the St Erth to St Ives branch line. St Erth is on the Cornish mainline linking Penzance to London. A coach to and from London operates from St Erth on the National Express (London / Penzance) service. Regular buses operate to and from St Ives / St Erth / Hayle / Penzance / Helston and other areas. There is a sleeper train service that operates both to and from St Erth station / Paddington and an overnight coach via London Heathrow (arriving 05.30am) and London Victoria (arriving 06.30am), making Carbis Bay and West Cornwall.

Shops include, but not limited to; Costcutter, Tesco, Carbis Bay Pharmacy, Katrina Zimmer Hair Dressers, Barbers, Animal Vets and optician. These are all located on St Ives Road, the main road through Carbis Bay to St Ives.

There is a mobile post office that parks at the Carbis Bay Memorial Hall, on Tuesday and Thursday, 9.30am to 12.00 noon.

St Uny Primary School, a Church of England School voluntarily controlled by the Diocese of Truro, is situated in Carbis Bay.

In January 2021 it was announced that Carbis Bay would be the venue for that year's G7 Summit in June.

All content from Kiddle encyclopedia articles (including the article images and facts) can be freely used under Attribution-ShareAlike license, unless stated otherwise. Cite this article:
Carbis Bay Facts for Kids. Kiddle Encyclopedia.