Kids Encyclopedia Facts
Not to be confused with Millennium Stadium, Cardiff.

Cardiff Arms Park (Welsh: Parc yr Arfau Caerdydd), also known as The Arms Park, is situated in the centre of Cardiff, Wales. It is primarily known as a rugby union stadium, but it also has a bowling green. The Arms Park was host to the British Empire and Commonwealth Games in 1958, and hosted four games in the 1991 Rugby World Cup, including the third-place play-off. The Arms Park also hosted the inaugural Heineken Cup Final of 1995–96 and the following year in 1996–97.

The history of the rugby ground begins with the first stands appearing for spectators in the ground in 1881–1882. Originally the Arms Park had a cricket ground to the north and a rugby union stadium to the south. By 1969, the cricket ground had been demolished to make way for the present day rugby ground to the north and a second rugby stadium to the south, called the National Stadium. The National Stadium, which was used by Wales national rugby union team, was officially opened on 7 April 1984, however in 1997 it was demolished to make way for the Millennium Stadium in 1999, which hosted the 1999 Rugby World Cup and became the national stadium of Wales. The rugby ground has remained the home of the semi-professional Cardiff RFC yet the professional Cardiff Blues regional rugby union team moved to the Cardiff City Stadium in 2009, but returned three years later.

The site is owned by Cardiff Athletic Club and has been host to many sports, apart from rugby union and cricket; they include athletics, association football, greyhound racing, tennis, British baseball and boxing. The site also has a bowling green to the north of the rugby ground, which is used by Cardiff Athletic Bowls Club, which is the bowls section of the Cardiff Athletic Club. The National Stadium also hosted many music concerts including Michael Jackson, Dire Straits, David Bowie, Bon Jovi, The Rolling Stones and U2.

Early history of the site

The inauguration of the Grandstand on 26 December 1885

The 3rd Marquess of Bute stipulated that the ground could only be used for "recreational purposes". At that time Cardiff Arms Park had a cricket ground to the north and a rugby union ground to the south. 1881–2 saw the first stands for spectators; they held 300 spectators and cost £50. The architect was Archibald Leitch, famous for designing Ibrox Stadium and Old Trafford, among others. In 1890, new standing areas were constructed along the entire length of the ground, with additional stands erected in 1896. 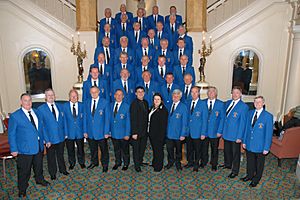 The National Stadium was known primarily as the venue for massed voices singing such hymns as "Cwm Rhondda", "Calon Lân", "Men of Harlech" and "Hen Wlad Fy Nhadau" ("Land of my Fathers" – the national anthem of Wales). The legendary atmosphere including singing of the crowd was said to be worth at least a try or a goal to the home nation. This tradition of singing has now passed on to the Millennium Stadium.

All content from Kiddle encyclopedia articles (including the article images and facts) can be freely used under Attribution-ShareAlike license, unless stated otherwise. Cite this article:
Cardiff Arms Park Facts for Kids. Kiddle Encyclopedia.