Cardiff Central Library (now Cardiff Central Library Hub) (Welsh: Llyfrgell Ganolog Caerdydd) is the main library in the city centre of Cardiff, Wales. Four buildings have been named as such, with the newest building opening on 14 March 2009 and officially being opened a few months later on 18 June 2009 by the Manic Street Preachers. The first Cardiff library was opened in 1861 as the Cardiff Free Library, later expanded and known as the Cardiff Free Library, Museum and Schools for Science and Art.

In 1861, a free library was set up by voluntary subscription above the St Mary Street entrance to the Royal Arcade in Cardiff. By 1862, the Public Libraries Act of 1855 allowed local councils with 5,000 inhabitants or more to raise a rate of one penny in the pound to provide a public library. Cardiff was the first town in Wales to establish a public library.

Two years later in 1864, the library had moved to bigger premises in the now demolished YMCA building in St Mary Street. A School of Science and Art and a small museum was also added, and so it became known as the Cardiff Free Library, Museum and Schools for Science and Art.

Cardiff Free Library, Museum and Schools for Science and Art, now known as the Old Library

The building was further extended to the south fourteen years later, with a new south frontage designed by James, Seward & Thomas, and was officially re-opened as the Central Library by the Prince of Wales on 27 July 1896.

The entrance to the building featured a corridor lined with ornamental wall tiles, designed to depict the four seasons and night and morning. These tiles were impressed with coloured clay to give the impression of a mosaic. This together with the stained glass installed throughout the building saw it become a Grade II* listed building. The Old Library (as it is now known) still exists and is in used by the Cardiff Story and a tourist information centre. 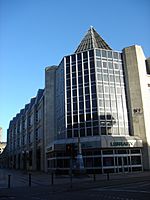 The Central Library was moved to a new building located on St David’s Link (Frederick Street), opposite what was then the multi-storey car park. The building was officially opened on 3 December 1988, and occupied the upper storeys of the commercial complex, which were accessed via a polygonal vestibule at street level.

The building was demolished in late 2006 together with the surrounding retail units to make way for the extension to St. David's Centre.

During the construction of the new building, library services were moved to temporary facilities on John Street which were officially opened on 1 September 2006. Consisting of two separate buildings adjoining the Welsh National Opera, the front overlooking Bute Street, featured 6-metre (20 ft) tall hoardings illustrating the spines of a number of books identified as those most commonly borrowed from the library. 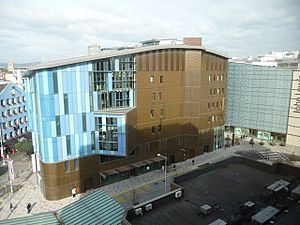 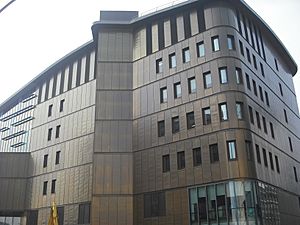 The rear elevation of the building

The present day Central Library building is located on The Hayes, cornered in between Mill Lane and Canal Street, opposite the St. David's 2 development. It occupies part of the car park previously used by the adjacent Marriott Hotel, and it was this site which gave rise to the building's triangular footprint.

Cardiff Council commissioned architects BDP to create a landmark buildings which symbolised the values of knowledge, learning and culture. Construction started in 2007. The building cost £13.5 million to build and construction took 98 weeks involving nearly 1,200 workers. 2000m² of glass form part of the exterior walls. The length of shelving for the books totals 3 kilometres. The project included 16000m² of restaurant units on the ground floor facing onto Mill Lane.

It was opened on 14 March 2009 and on 18 June the Manic Street Preachers unveiled a plaque with the words "libraries gave us power", from their 1996 single A Design for Life. 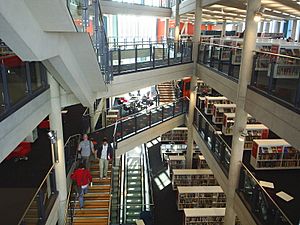 The interior of Cardiff Central Library

The building was specifically designed to be energy-efficient, and includes a sedum grass roof to improve insulation and reduce rainwater run-off, coloured glass panels and solar shading to prevent excessive heat gains, and a full Building Management System to provide climate control to individual floors. As a result of these measures the building was awarded a BREEAM rating of 'excellent'. Panels of brass cladding covered the side and rear facade of the library, intended to give the impression of leather-bound bookends.

There are a total of six floors with part of the ground floor housing three retail outlets, initially occupied by branches of Wagamama, Gourmet Burger Kitchen, and Carluccio's.

All content from Kiddle encyclopedia articles (including the article images and facts) can be freely used under Attribution-ShareAlike license, unless stated otherwise. Cite this article:
Cardiff Central Library Facts for Kids. Kiddle Encyclopedia.