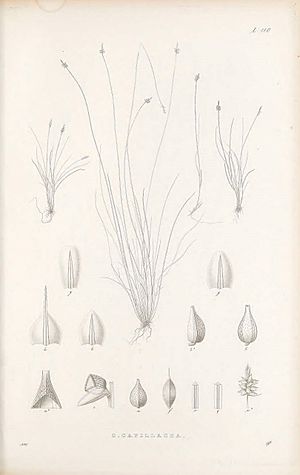 Carex capillacea is densely tufted. The culms (up to 30 cm long by 0.5 mm) are erect and slender. The leaves are usually shorter than culms, and the sheath is green to pale brown. The inflorescence is erect and has one spike. The male portion of the spike is above the female portion. The style is divided into three parts.

In New Zealand it is found on the North Island on the Waimarino Plain, and the Moawhango and in the South Island from Nelson and Marlborough south to the lakes of Te Anau, Manapouri, Hauroko and east to Lumsden. Its preferred habitat is bogs, seepages, and the margins of ponds and pools.

Assessments under the New Zealand Threat Classification System (NZTCS), declared it to be "At Risk – Naturally Uncommon" (NU) in 2013, and in 2017 to be "Threatened – Nationally Vulnerable" (NV). In Tasmania, it is declared "Threatened".

Carex capillacea was first described in 1858 by Francis Boott from specimens collected in the temperate eastern Himalayas at 10,000 to 12,000 feet (3,000 to 3,700 m) by Joseph Dalton Hooker in Sikkim and by William Griffith in Bhutan.

The specific epithet, capillacea, derives from the Latin capillus "hair" or "thread", and thus describes the plant as being thread-like.

All content from Kiddle encyclopedia articles (including the article images and facts) can be freely used under Attribution-ShareAlike license, unless stated otherwise. Cite this article:
Carex capillacea Facts for Kids. Kiddle Encyclopedia.