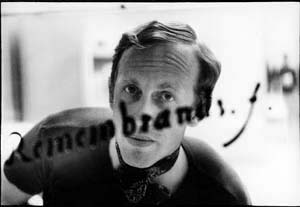 Carl Fredrik Reuterswärd (4 June 1934 – 3 May 2016) was a Swedish painter and sculptor. He was a professor of painting at The Academy of Fine Arts in Stockholm from 1965 until 1969. In 1974, he was a guest professor at Minneapolis School of Art in Minneapolis, Minnesota. In 1986 he was awarded the Prince Eugen Medal for painting.

Reuterswärd was known for his sculpture showing a revolver tied in a knot, called Non violence. It is outside of the United Nations Headquarters in New York City.

Reuterswärd died of pneumonia at a hospital in Landskrona, Sweden on 3 May 2016, aged 81.

All content from Kiddle encyclopedia articles (including the article images and facts) can be freely used under Attribution-ShareAlike license, unless stated otherwise. Cite this article:
Carl Fredrik Reuterswärd Facts for Kids. Kiddle Encyclopedia.