Carle Place (also known historically as Frog Hollow and Mineola Park) is a hamlet and census-designated place (CDP) in the Town of North Hempstead in Nassau County, on Long Island, in New York, United States. The CDP's population was 4,981 at the 2010 census.

The hamlet draws its name from the Carle House - a 32-room house built by Silas Carle in Westbury in the 1800s. It was called the "Carle Place", and the surrounding area later took the name. An early name (and still-current nickname) for the region is Frog Hollow. As a result, the local high school's sports teams are called the Frogs and the school colors are green and white.

Legend has it that as New York City residents and friends of Carle visited Silas Carle, Long Island Railroad conductors would announce "everyone getting off for Carle's Place" to get off the train is how the name Carle Place evolved.

In 1946, developer William J. Levitt bought 19 acres (77,000 m2) for an experiment. His crews brought pre-cut lumber to the site and rapidly assembled 600 low-cost houses on a site near the Carle Place station of the Long Island Railroad, offering affordable suburban living with an easy commute into offices in New York City. Within five years, returning veterans and their families swelled the population by 500 percent. It transformed Carle Place, and served as the prototype for the gargantuan development Levitt began the following year a few miles away: Levittown.

Carle Place has its own school district, which includes small parts of Westbury and Mineola, but is still one of the smallest in New York state. The primary school "Cherry Lane School", the elementary school "Rushmore Avenue School", and the secondary school called "Carle Place Middle School/High School" adjoin each other on one campus. 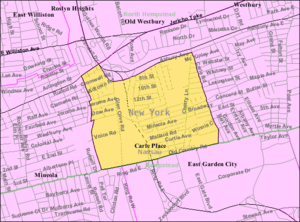 There were 1,900 households out of which 31.7% had children under the age of 18 living with them, 59.8% were married couples living together, 9.5% had a female householder with no husband present, and 27.8% were non-families. 23.9% of all households were made up of individuals and 10.0% had someone living alone who was 65 years of age or older. The average household size was 2.76 and the average family size was 3.31.

Carle Place is considered a bedroom community of the City of New York. As such, many residents commute to/from New York for work. The hamlet also consists of areas of varying sizes zoned for commercial, retail, and industrial uses.

Additionally, Carle Place is the headquarters of 1-800 Flowers.

Carle Place has its own school district, which, though it includes small portions of the villages of Westbury and Mineola, is one of the smallest in New York state. It consists of three schools which adjoin each other on one large campus:

The entirety of Carle Place is located within this district, thus meaning all children who reside within the hamlet and attend public schools go to Carle Place's schools.

The Long Island Rail Road's Carle Place station is located within the hamlet. It is located on the LIRR's Main Line.

All content from Kiddle encyclopedia articles (including the article images and facts) can be freely used under Attribution-ShareAlike license, unless stated otherwise. Cite this article:
Carle Place, New York Facts for Kids. Kiddle Encyclopedia.