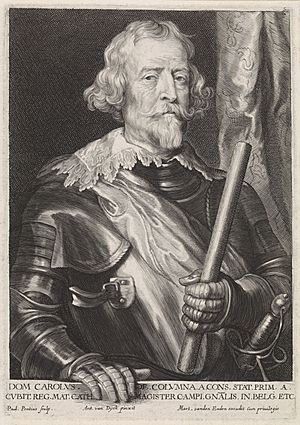 A portrait of Carlos Coloma, engraved by Paulus Pontius after Anthony van Dyck.

Coloma was born in the important House of Coloma. He was the fourth son out of 14 children from the third marriage of don Juan IV Coloma y Cardona, 1st Count of Elda. His older brother Alfonso Coloma was bishop of Barcelona. He married a Flemish noblewoman, Marguerite of Gavere-Liedekercke, Noble canoness of the Saint Waltrude Collegiate Church. Marguerite was a daughter of Anthony I van Liederkerke and Louise de la Barre. They had 4 sons and 6 daughters.

His father was also a soldier and a writer. Coloma joined the army as an ensign in 1581 and campaigned in Portugal, Sicily, the Netherlands and Germany, eventually making his way up to the rank of maestro de campo general. He played an important part in the Siege of Doullens (1595). After serving as governor of the Roussillon (1600-1611) and viceroy of Mallorca (1611-1617), he became governor of Cambrai in 1617. In 1621 he took over from Spinola as commander-in-chief of the Spanish invasion of the Electorate of the Palatinate. The following year he succeeded the Count of Gondomar as Spanish ambassador to England. Recalled when war broke out between England and Spain in 1624, he participated in Spinola's Siege of Breda (August 1624-June 1625) and is supposedly portrayed on Velázquez' Las Lanzas. After a term as commander in Milan, Coloma returned to London in 1630 to restore peace between the two crowns. From 1631 until his return to Spain in 1634, he acted as commander-in-chief of the Army of Flanders. During his final years he served King Philip IV as mayordomo mayor and member of the Council of State.

Coloma received the habito of the Order of Santiago in 1591 and was given the Commandry of Montiel y La Ossa in 1621. On 16 September 1627, Philip IV created him Marquess of Espinar.

All content from Kiddle encyclopedia articles (including the article images and facts) can be freely used under Attribution-ShareAlike license, unless stated otherwise. Cite this article:
Carlos Coloma Facts for Kids. Kiddle Encyclopedia.