The community is bounded by the city of Poway to the east; other communities of San Diego, Rancho Bernardo to the north; Rancho Peñasquitos to the west; and Sabre Springs to the south. 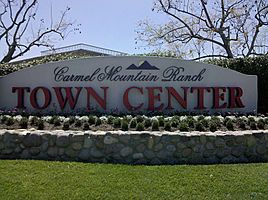 The 15 runs along the western edge of Carmel Mountain, and a noticeable stone marker, complete with sign and flags, is visible from the northbound lanes to act as a gateway immediately before the Carmel Mountain Road exit, which is the primary road serving the community. The eastern terminus of the 56 becomes Ted Williams Parkway as it enters the community; however, it retains its freeway characteristics until it crosses Rancho Carmel Drive.

There are local bus routes. While Carmel Mountain does not share in the name, the Sabre Springs / Penasquitos Transit Station, which provides direct access to the managed express lanes on the 15, is adjacent to the community. 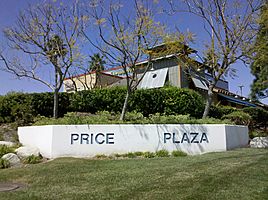 Costco Wholesale is the main anchor here; however, there are also smaller stores, such as eateries and a bank.

Every year the local Chamber of Commerce, headquartered within the community, hosts a fall festival at which local businesses, community organizations, and school representatives set up information booths and interact with attendees.

Fairway Village, a neighborhood division of Carmel Mountain Ranch running east-to-west on Stoney Gate Place, parallel to Ted Williams Parkway and crossed by Shoal Creek Drive, presents an annual Christmas light show called "Holiday Magic at Fairway Village." The neighborhood lights more than 85 homes from December 1 to January 1. Each year on the Saturday before Christmas, the neighborhood holds an evening block party that is open to the public, where visitors can walk through the neighborhood, enjoy the lights and festivities, and partake of snacks and hot drinks offered by many homes. This event has been featured in several San Diego Family magazine articles. The neighborhood is also very popular at Halloween due to it being a large cul-de-sac street with no hills.

The Carmel Mountain Ranch Country Club sprawls much of the community and is available for golf tournaments, weddings, and other events.

All content from Kiddle encyclopedia articles (including the article images and facts) can be freely used under Attribution-ShareAlike license, unless stated otherwise. Cite this article:
Carmel Mountain Ranch, San Diego Facts for Kids. Kiddle Encyclopedia.