Kids Encyclopedia Facts
This article is about the lake, for the city see Carter Lake, Iowa

Carter Lake is a shallow oxbow lake in Nebraska and Iowa, located next to Omaha and Carter Lake. Soon after its formation the lake was called the East Omaha Lake, and then Lake Nakoma. 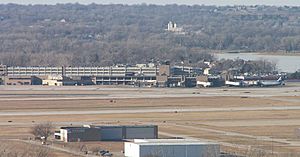 View of Eppley Airfield with Carter Lake visible to the right

The Saratoga Bend was the impetus for the creation of the town of Saratoga, Nebraska Territory, a short mile from the river. However, the Bend was cut off from the river after a flood in 1877. A beach resort with a large boathouse and two-story pavilion, a Rod and Gun Club, and a YMCA camp had all settled on the shores of Lake Nakoma by 1906.

The Carter Lake and Levi Carter Park at 3100 Abbott Drive were named after one of Omaha's original industrialists named Levi Carter, who ran a white lead smelter in the area.

All content from Kiddle encyclopedia articles (including the article images and facts) can be freely used under Attribution-ShareAlike license, unless stated otherwise. Cite this article:
Carter Lake (Iowa–Nebraska) Facts for Kids. Kiddle Encyclopedia.