Carthage is a city and the county seat of Hancock County, Illinois, United States. The population was 2,490 as of the 2020 census, Carthage is best known for being the site of the 1844 death of Joseph Smith, founder of the Latter Day Saint movement.

The first European-Americans settlers arrived in Carthage and Hancock County in the first few decades of the 19th century. By 1833, they had erected simple buildings in Carthage, and the town was platted in 1838. By this time Carthage had been designated as the county seat of Hancock County.

While incarcerated in the Carthage Jail in June 1844, Joseph Smith, founder of the Latter Day Saint movement, and his brother Hyrum Smith were killed by a mob on Thursday, June 27, 1844.

On October 22, 1858, Abraham Lincoln spoke in Carthage while campaigning for the Senate. The speech spot is commemorated by a large stone on the south side of the Courthouse square.

Over the years the jail had been modified and used for different purposes. For a period the jail was home to Carthage College. The jail has been restored to a close approximation of its appearance in 1844 and is now owned by The Church of Jesus Christ of Latter-day Saints. The site, a full city block, is a historical visitor's center.

Carthage is the only city in Illinois to have all of the jails ever used still in existence: The old jail, called the Mormon Jail; the jail next built which was also the Sheriff's residence and is on the south side of the Courthouse square; and the new jail, on Highway 136 on the city's west side.

The Hancock County Courthouse in Carthage, built in 1908, is the third courthouse for the county. It is at the center of the square in Carthage. The courthouse and shops surrounding the square have been listed on the National Register of Historic Places since 1986.

In June, 2006 development property on the east side of Carthage was voluntarily annexed into the city limits. This property totaled approximately .43 square miles (1.1 km2), all land except for an eight-acre lake. 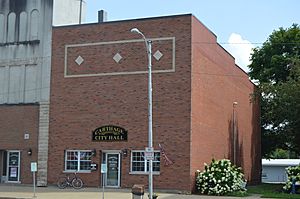 Carthage's economy is centered around agriculture and supporting industries. The surrounding land is devoted to the cultivation of crops, especially corn and soybeans. Industrial hog farms are also near the city.

The company Methode Electronics, Inc. operates an auto parts production facility in Carthage, though the company no longer employs as large a portion of the population as was once the case.

Carl Sandburg College, a two-year community college in Galesburg, has a satellite campus on the north side of Carthage.

The former Carthage College campus was purchased by Prairieland Investment Group in June 2007. (Hancock County Journal Pilot June 27, 2007) Some buildings are renovated for use by Carthage Veterinary Clinic. The auditorium was given to Carl Sandburg College, and has been restored for use by the college and for community presentations and events.

All content from Kiddle encyclopedia articles (including the article images and facts) can be freely used under Attribution-ShareAlike license, unless stated otherwise. Cite this article:
Carthage, Illinois Facts for Kids. Kiddle Encyclopedia.