Cassopolis is a village in the U.S. state of Michigan and the county seat of Cass County. It is located mostly in LaGrange Township with a small portion extending east into Penn Township. The village and county are named after statesman Lewis Cass, a New Hampshire native and a prominent U.S. senator from Michigan prior to the American Civil War.

Diamond Lake, one of the 100 largest inland lakes in Michigan, is located in Cassopolis.

Cassopolis is part of the South Bend–Mishawaka, IN-MI, Metropolitan Statistical Area. The population was 1,774 at the 2010 census. Cassopolis was platted by European Americans in 1831. It had already been designated the county seat by that point. It was incorporated as a village in 1863. The county developed farming and some industry.

Cassopolis was a transit point on the Underground Railroad, by which sympathizers aided refugee slaves from the South to gain freedom in the North and in Canada. Some refugees continued through Michigan to settle in Canada in order to avoid risk under the 1850 Fugitive Slave Law, which increased incentives for capture. However the 1850s also saw the settlement of many African-Americans and people of mixed African-American and Sapponi and Pumenkey ancestry in Cass County.

In the 1960s, a group of African Americans connected to the Nation of Islam acquired some 1,000 acres of farmland in the area. Work on this acquisition was overseen by a man who had graduated from Cassopolis High.

Cassopolis was platted in 1831. It had already been designated the county seat by that point. It was incorporated as a village in 1863.

Cassopolis was a transit point on the Underground Railroad. In the 1960s, a group connected to the Nation of Islam acquired some 1,000 acres of farmland in the area with work overseen by a graduate of Cassopolis High. 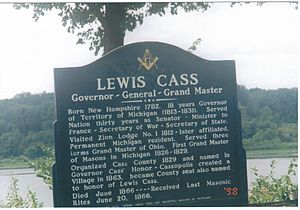 According to the United States Census Bureau, the village has a total area of 2.25 square miles (5.83 km2), of which 2.00 square miles (5.18 km2) is land and 0.25 square miles (0.65 km2) is water. Cassopolis is the town associated with Diamond Lake, the largest lake in southwestern Michigan. 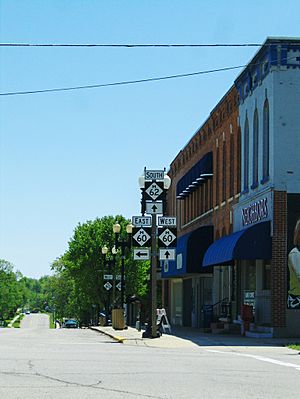 There were 709 households, of which 32.9% had children under the age of 18 living with them, 31.5% were married couples living together, 15.8% had a female householder with no husband present, 6.9% had a male householder with no wife present, and 45.8% were non-families. 40.8% of all households were made up of individuals, and 17.7% had someone living alone who was 65 years of age or older. The average household size was 2.32 and the average family size was 3.15.

All content from Kiddle encyclopedia articles (including the article images and facts) can be freely used under Attribution-ShareAlike license, unless stated otherwise. Cite this article:
Cassopolis, Michigan Facts for Kids. Kiddle Encyclopedia.