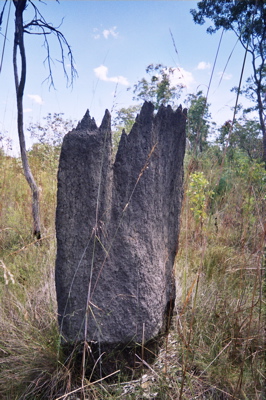 Termite mound: termites developed eusociality in the Jurassic period, over 145 million years ago.

In some eusocial species, individuals of one species live together in colonies. These groups are often called nests or hives. Often there is a division of labour. In Hymenoptera, for example, a hive may have several kinds of females, which by Polyphenism carry out different tasks, and whose bodies are different.

Such specialized types in one species are known as castes. Castes that are not involved in producing offspring are usually sterile. The term originally comes from the caste-system in Hinduism.

Eusociality exists in certain insects, crustaceans and mammals. It is mostly observed and studied in the Hymenoptera (ants, bees, and wasps) and in the termites. A colony has caste differences: queens and reproductive males take the roles of the sole reproducers, while soldiers and workers work together to create a living situation favorable for the brood. In addition to Hymenoptera and Isoptera, there are two known eusocial vertebrates among the rodents: the naked mole-rat and the Damaraland mole-rat. Some shrimps, such as Synalpheus regalis, are also eusocial. E. O. Wilson has claimed that humans are eusocial, but his arguments have been refuted by a large number of evolutionary biologists, who note that humans do not have division of reproductive labor.

Most eusocial societies exist in arthropods, while a few are found in mammals. 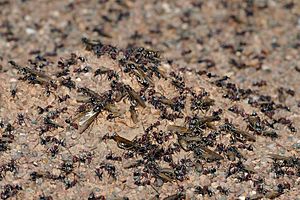 The order Hymenoptera contains the largest group of eusocial insects, including ants, bees, and wasps – those with reproductive "queens" and more or less sterile "workers" and/or "soldiers" that perform specialized tasks. For example, in the well-studied social wasp Polistes versicolor, dominant females perform tasks such as building new cells and ovipositing, while subordinate females tend to perform tasks like feeding the larvae and foraging. The task differentiation between castes can be seen in the fact that subordinates complete 81.4% of the total foraging activity, while dominants only complete 18.6% of the total foraging.

While only a moderate percentage of species in bees (families Apidae and Halictidae) and wasps (Crabronidae and Vespidae) are eusocial, nearly all species of ants (Formicidae) are eusocial. Some major lineages within these groups are mostly or entirely eusocial, as well, such as the bee tribes Apini, Bombini, Euglossini, and Meliponini, and the wasp subfamilies Polistinae and Vespinae. Eusociality in these families is sometimes managed by a set of pheromones that alter the behavior of specific castes in the colony. These pheromones may act across different species, as observed in Apis andreniformis (black dwarf honey bee), where worker bees responded to queen pheromone from the related Apis florea (red dwarf honey bee). Pheromones are sometimes used in these castes to assist with foraging. Workers of the Australian stingless bee Tetragonula carbonaria, for instance, mark food sources with a pheromone, helping their nest mates to find the food.

Reproductive specialization generally involves the production of sterile members of the species, which carry out specialized tasks to care for the reproductive members. It can manifest in the appearance of individuals within a group whose behavior or morphology is modified for group defense, including self-sacrificing behavior ("altruism"). An example of a species whose sterile caste displays this altruistic behavior is Myrmecocystus mexicanus, one of the species of honey ant. Select sterile workers fill their abdomens with liquid food until they become immobile and hang from the ceilings of the underground nests, acting as food storage for the rest of the colony. Not all social species of insects have distinct morphological differences between castes. For example, in the Neotropical social wasp Synoeca surinama, social displays determine the caste ranks of individuals in the developing brood. These castes are sometimes further specialized in their behavior based on age. For example,Scaptotrigona postica workers assume different roles in the nest based on their age. Between approximately 0–40 days old, the workers perform tasks within the nest such as provisioning cell broods, colony cleaning, and nectar reception and dehydration. Once older than 40 days, Scaptotrigona postica workers move outside of the nest to practice colony defense and foraging.

In Lasioglossum aeneiventre, a halictid bee from Central America, nests may be headed by more than one female; such nests have more cells, and the number of active cells per female is correlated with the number of females in the nest, implying that having more females leads to more efficient building and provisioning of cells. In similar species with only one queen, such as Lasioglossum malachurum in Europe, the degree of eusociality depends on the clime in which the species is found.

Termites (order Blattodea, infraorder Isoptera) make up another large portion of highly advanced eusocial animals. The colony is differentiated into various castes: the queen and king are the sole reproducing individuals; workers forage and maintain food and resources; and soldiers defend the colony against ant attacks. The latter two castes, which are sterile and perform highly specialized, complex social behaviors, are derived from different stages of pluripotent larvae produced by the reproductive caste. Some soldiers have jaws so enlarged (specialized for defense and attack) that they are unable to feed themselves and must be fed by workers.

Austroplatypus incompertus is a species of ambrosia beetle native to Australia, and is the first beetle (order Coleoptera) to be recognized as eusocial. This species forms colonies in which a single female is fertilized, and is protected by many unfertilized females, which also serve as workers excavating tunnels in trees. This species also participates in cooperative brood care, in which individuals care for juveniles that are not their own.

Some species of gall-inducing insects, including the gall-forming aphid, Pemphigus spyrothecae (order Hemiptera), and thrips (order Thysanoptera), were also described as eusocial. These species have very high relatedness among individuals due to their partially asexual mode of reproduction (sterile soldier castes being clones of the reproducing female), but the gall-inhabiting behavior gives these species a defensible resource that sets them apart from related species with similar genetics. They produce soldier castes capable of fortress defense and protection of their colony against both predators and competitors. In these groups, therefore, high relatedness alone does not lead to the evolution of social behavior, but requires that groups occur in a restricted, shared area. These species have morphologically distinct soldier castes that defend against kleptoparasites (parasitism by theft) and are able to reproduce parthenogenetically (without fertilization).

Eusociality has also arisen three different times among some crustaceans that live in separate colonies. Synalpheus regalis, Synalpheus filitigitus, and Synalpheus chacei, three species of parasitic shrimp that rely on fortress defense and live in groups of closely related individuals in tropical reefs and sponges, live eusocially with a single breeding female and a large number of male defenders, armed with enlarged snapping claws. As with other eusocial societies, there is a single shared living space for the colony members, and the non-breeding members act to defend it.

The fortress defense hypothesis additionally points out that because sponges provide both food and shelter, there is an aggregation of relatives (because the shrimp do not have to disperse to find food), and much competition for those nesting sites. Being the target of attack promotes a good defense system (soldier caste); soldiers therefore promote the fitness of the whole nest by ensuring safety and reproduction of the queen.

Eusociality offers a competitive advantage in shrimp populations. Eusocial species were found to be more abundant, occupy more of the habitat, and use more of the available resources than non-eusocial species. Other studies add to these findings by pointing out that cohabitation was more rare than expected by chance, and that most sponges were dominated by one species, which was frequently eusocial. 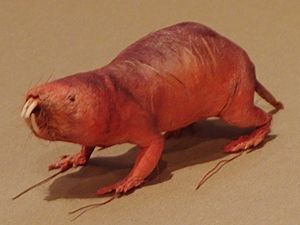 Naked mole-rat, one of two eusocial species in the Bathyergidae

Among mammals, eusociality is known in two species in the Bathyergidae, the naked mole-rat (Heterocephalus glaber) and the Damaraland mole-rat (Fukomys damarensis), both of which are diploid and highly inbred. Usually living in harsh or limiting environments, these mole-rats aid in raising siblings and relatives born to a single reproductive queen. However, this classification is controversial owing to disputed definitions of 'eusociality.' To avoid inbreeding, mole rats sometimes outbreed and establish new colonies when resources are sufficient. Most of the individuals cooperatively care for the brood of a single reproductive female (the queen) to which they are most likely related. Thus, it is uncertain whether mole rats classify as true eusocial organisms, since their social behavior depends largely on their resources and environment.

Some mammals within the Carnivora and Primates exhibit eusocial tendencies. Perhaps most notable are meerkats (Suricata suricatta) and dwarf mongooses (Helogale parvula). These show cooperative breeding and marked reproductive skews. In the dwarf mongoose, the breeding pair receives food priority and protection from subordinates and rarely has to defend against predators.

All content from Kiddle encyclopedia articles (including the article images and facts) can be freely used under Attribution-ShareAlike license, unless stated otherwise. Cite this article:
Caste (biology) Facts for Kids. Kiddle Encyclopedia.