The Cathedral Santuario de la Virgen de Guadalupe (Cathedral Shrine of the Virgin of Guadalupe) is the cathedral church of the Roman Catholic Diocese of Dallas, Texas. The structure dates from the late 19th century and is located in the Arts District of downtown Dallas, Texas. The church oversees the second largest Catholic church membership in the United States. Its average Sunday attendance is 11,200. 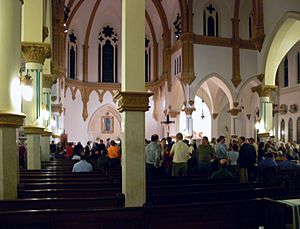 In 1869, Dallas's first Catholic parish, Sacred Heart Church, was established by the Bishop of Galveston. The church was built in 1872 and was located at Bryan and Ervay Streets, near present-day St. Paul Station.

In 1890, Dallas was established as a diocese, and Sacred Heart became the diocesan cathedral of Dallas with Bishop Thomas Brennan acting as the first bishop. Along with Dallas' tremendous growth at the time, the parish soon outgrew its church building, and the need for a new cathedral arose.

The property on which the current Cathedral is now located was purchased for US$30,000, which adjusted for inflation, is equivalent to over $600,000 in 2007. The cornerstone for the Cathedral was laid June 17, 1898 and the church was formally dedicated on October 26, 1902.

As the Dallas–Fort Worth metroplex grew through the early 20th century, other diocesan parishes were built in neighboring suburbs, decreasing Sacred Heart's attendance. However, by the 1960s the neighboring Our Lady of Guadalupe parish had outgrown its facilities. 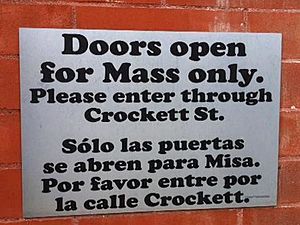 The parish, located on Harwood Street, was established in 1914 and primarily served Mexican immigrants. Bishop Thomas Tschoepe of Sacred Heart invited Our Lady of Guadalupe to merge with Sacred Heart, and by 1975, the Guadalupe church on Harwood closed following the churches' consolidation. On December 12, 1977, Sacred Heart Cathedral was renamed Cathedral Santuario de Guadalupe—"the Cathedral Shrine of Our Lady of Guadalupe." This reflects the large Spanish-speaking proportion of the congregation, so that the congregation now has masses and various programs in Spanish and English, as well as English classes.

The Cathedral recently underwent a major multi-phase renovation project. As part of the project, a US$20 million bell tower housing a 49-bell carillon was constructed. The bell tower was planned by the original architect, Nicholas J. Clayton, but had not been built.

All content from Kiddle encyclopedia articles (including the article images and facts) can be freely used under Attribution-ShareAlike license, unless stated otherwise. Cite this article:
Cathedral Santuario de Guadalupe (Dallas, Texas) Facts for Kids. Kiddle Encyclopedia.