Cedar-Riverside, also referred to as the West Bank, or simply Riverside, is a neighborhood within Minneapolis, Minnesota. Its boundaries are the Mississippi River to the north and east, Interstate 94 to the south, and Hiawatha Avenue and Interstate 35W to the west. It has a longstanding tradition of cultural diversity and settlement, with a robust arts tradition.

Cedar-Riverside is one of the most diverse areas in Minneapolis-St. Paul. It is home to a number of the 100 or so different languages that are spoken in the Twin Cities. A vibrant neighborhood, it boasts many restaurants, cafés, bars, and venues for performance art and music.

The Cedar-Riverside neighborhood is historically known for its immigrant population, beginning in the late 1940s post-World War II with immigrants from eastern Europe. With the arrival of many new Cambodian, Somali, and especially Latino immigrants, hospitals now also offer services in other languages to accommodate patients whose mother tongue is not English.

It is served by the Blue and Green light rail lines. It is the only neighborhood in the Twin Cities with two light rail stops.

In the late 19th century, Cedar-Riverside had a sizable Scandinavian immigrant community, most of whose members labored in the Mississippi River's lumber and milling industries. It later evolved into a hub for intellectuals, hippies, radical activists, actors, musicians and artists during the 1960s and 70s. In keeping with its tradition of ethnic and cultural diversity, the neighborhood is today home to the largest immigrant community in the Twin Cities. Somalis are now the predominant minority group in the area, resulting in the neighborhood being nicknamed "Little Mogadishu."

The neighborhood has been a port of entry for immigrants since Swedes, Germans, and Bohemians began arriving in large numbers during the late 19th century. Cedar Avenue became a hub of the Minneapolis Scandinavian community in the late 1800s. Swedish, Norwegian, and Danish were spoken in many of the businesses, and in the early days, stars of Swedish American vaudeville entertained at Dania Hall, Mozart Hall and The Southern Theater. 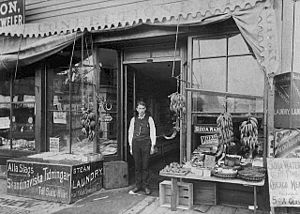 There was Samuelsen’s confectionery and soda shop, Hagen's appliance store, Moberg’s Norwegian deli, and a host of other Scandinavian-owned businesses. On Cedar Avenue was Dania Hall, where the Danish community would meet. An eclectic mix of Gothic and classical styles, the building included a dining hall and kitchen in the basement, commercial space on the first floor, offices for the Society of Dania plus billiard and reading rooms on the second floor. A theater/assembly hall on the third and fourth floors featured Scandinavian vaudeville acts and weekend dances. On the corner next to Dania Hall was the Breezy Point Tavern owned by Oscar Carlsen, a Norwegian immigrant from the turn of the 20th century. Oscar had come to Minnesota to work in the lumber camps. 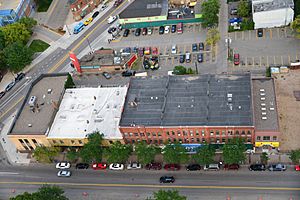 Original buildings on the east side of Cedar Avenue; the vacant site of Dania Hall (right)

Where men in the community once worked in small businesses, or as skilled tradesmen, and workers for the railroad, flour mills, and breweries, Cedar-Riverside declined as a core community in the 1920s due to the impact of Prohibition on the entertainment district. Into the 1940s, Cedar-Riverside remained heavily Scandinavian. Postwar immigrants from all over Eastern Europe then settled in the area. The junction of Washington Avenue, Cedar Avenue, and 19th Avenue was known as Seven Corners. The Cedar-Riverside area had been known as "Snoose Boulevard" (Snusgatan) because so many Scandinavians lived there.

The West Bank, with the locally infamous Seven Corners district, mouldered into a skid row scene in the 1950s. In the mid-to-late 1960s, the area became the center of the University-oriented counterculture and antiwar movement. It was home to local hippies, protesters, and other anti-establishment groups between the 1960s and early 1970s. During those days, the neighborhood was known as the "Haight-Ashbury of the Midwest." 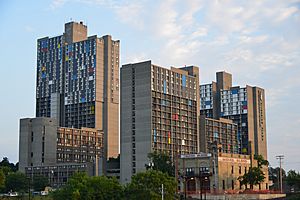 Riverside Plaza and the Mixed Blood Theatre at sunset

The West Bank was home to McCosh's secondhand book store, a center for Beat and Hippie left-leaning bookworms. A community of hippies — and numerous students and hangers-on who emulated the hippie lifestyle (at least on weekends) — lived in old rental houses in the area and congregated at coffeehouses, such as the Extemporé, The Scholar and the Broken Drum, and at bars, such as the Triangle Bar, the Viking, Caesar's, The Mixers and the Music Bar. (The latter burned down the night Robert Kennedy was assassinated, and eventually was replaced by a "people's park"). The Triangle often featured performers and recording artists Dave Ray, Tony Glover and John Koerner, who had associated to some degree with Bob Dylan during his brief Minneapolis sojourn.

In 1973, the Riverside Plaza apartment complex was opened. Designed by architect and Cedar-Riverside resident Ralph Rapson, the tall buildings with their signature colored panels are a Minneapolis landmark and were featured as the residence of Mary Richards in later seasons of The Mary Tyler Moore Show. Many of the businesses that were established during that time — Martha's Antiques, the Whale Leather Shop, the Five Corners Saloon, Richter's Drug Store and Smith's Leather Shop — eventually went out of business, gradually giving way to newer stores and shops. However, the old Depth of Field remains. 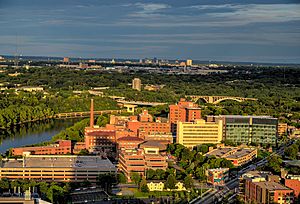 The University of Minnesota Medical Center

The neighborhood's past still has an influence in the present. Some of the businesses in the area harken back to an earlier time, like the worker-controlled punk hangout, Hard Times Café and the now-closed North Country Food Co-Op. In fact, some of the businesses, specifically in the Seven Corners district, use the history to promote their own business, such as the "Legend of the Seven Switchmen."

Fairview Hospital and St. Mary's Hospital figured prominently in the neighborhood, being only a few blocks away. Fairview and St. Mary's, which merged in 1986, later merged with the University of Minnesota Hospitals, forming a major medical complex straddling the Mississippi River. The organization is now known as University of Minnesota Medical Center. 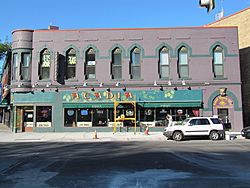 Cedar-Riverside is home to a thriving arts culture. There are many playhouses and theatre groups in the area, including the Mixed Blood Theatre Company, Theatre in the Round, and The Southern Theater. There is also a percolating music scene, with musicians frequenting venues like The Cedar Cultural Center, The Triple Rock Social Club, The Cabooze, The Red Sea, The Nomad World Pub, Acadia Cafe, and Palmer's.

Many of these musicians also taught, performed and/or jammed at the West Bank School of Music. The Cedar Cultural Center, Cafe Extempore, Scholar Coffeehouse, New Riverside Cafe, Viking Bar, 400 Bar, 7 Corners, Whisky Junction, Cabooze and Cedarfest have likewise all been popular music venues in their time. Established in 1978, KFAI community radio has broadcast a mix of community talk radio and folk and avant-garde music from around the world from the Bailey building since 1991.

The arts flavor of the area is enhanced by the presence of Augsburg College and the University of Minnesota's West Bank Arts Quarter, which is home to the University’s arts programs. 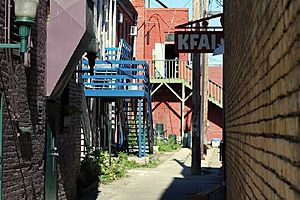 All content from Kiddle encyclopedia articles (including the article images and facts) can be freely used under Attribution-ShareAlike license, unless stated otherwise. Cite this article:
Cedar-Riverside, Minneapolis Facts for Kids. Kiddle Encyclopedia.