Centre for Life facts for kids

The Centre for Life is a science village in Newcastle upon Tyne where scientists, clinicians, educationalists and business people work to promote the advancement of the life sciences. The centre is a registered charity, governed by a board of trustees, which receives no public funding.

The Centre was opened by the Queen in May 2000. In March 2009 the centre was the main venue for the UK's first Maker Faire, run as part of the Newcastle ScienceFest. The 2010 Newcastle Maker Faire was held at the Centre for Life and the nearby Discovery Museum. Maker Faire UK returned to the Centre for Life in 2013, at which over 300 hackers, crafters, coders, DIYers and inventors presented their projects alongside installations and drop-in workshops. 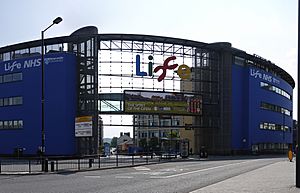 The northern entrance to the Centre for Life and Times Square.

The Life Science Centre is a visitor attraction at the International Centre for Life. It has a changing programme of events made up of temporary and permanent exhibitions, a Science Theatre, a planetarium.

The centre provides employment for some 600 people. Partners in the Centre for Life include Newcastle University. The Experiment Zone allows visitors to try out laboratory-style experiments such as DNA extraction and the Brain Zone explores how the human brain works.

Each year a new temporary exhibition is hosted or launched in May, often a major touring exhibition such as Body Worlds Vital in 2014. In the winter months, Times Square is host to an open-air ice rink.

Newcastle Fertility Centre was established in 1991 at the RVI, later moving to the Centre for Life and officially opened by Professor Lord Robert Winston on 22 February 2000. As well as treating infertile couples, it carries out research and development into new fertility treatments.

Scientists based at The Centre for Life are the first people in Europe - and only the second in the world - to get a license for stem cell research on human embryos. The license will allow work on new treatments for conditions including diabetes, Alzheimer's disease and Parkinson's disease. In 2005 scientists based at the centre were the first to successfully clone a human embryo.

In December 2020, the venue was one of the preliminary vaccination centres for the roll out of the COVID-19 vaccine.

All content from Kiddle encyclopedia articles (including the article images and facts) can be freely used under Attribution-ShareAlike license, unless stated otherwise. Cite this article:
Centre for Life Facts for Kids. Kiddle Encyclopedia.