Chamaesipho brunnea is an intertidal barnacle common in New Zealand, in both the North Island and the South Island. Juveniles have six shell wall plates, reducing to four in adults, and with age, all plates become concrescent, with no trace of sutures inside or out. Shell is brown colored. The related, and sometimes associated Chamaesipho columna is much smaller in size, by nearly half, while Elminius, which can associate with both species, also has four shell wall plates, but plates remain distinct at all stages. The shell of C. columna corrodes to a pitted surface, while that of C. brunnea has a lamellar corrosion. 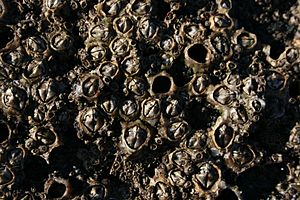 Chamaesipho brunnea is found naturally only on New Zealand shores. Its range overlaps extensively with C. columna. All coasts of North Island fitting environmental preferences are colonized. On the South Island, it is not found on, or south of, Stewart Island. On the Chatham Islands, only C. brunnea is present. As this species breeds primarily in spring and summer, water temperatures may be controlling factor in distribution.

All content from Kiddle encyclopedia articles (including the article images and facts) can be freely used under Attribution-ShareAlike license, unless stated otherwise. Cite this article:
Chamaesipho brunnea Facts for Kids. Kiddle Encyclopedia.