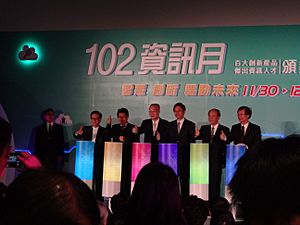 Chang at Taipei IT Month

Chang San-cheng or Simon Chang (Chinese: 張善政; pinyin: Zhāng Shànzhèng) (born 24 June 1954) is a Taiwan politician. He was Premier of the Republic of China from 1 February 2016 until 20 May 2016, appointed by President Ma Ying-jeou. He was Vice Premier from 8 December 2014.

All content from Kiddle encyclopedia articles (including the article images and facts) can be freely used under Attribution-ShareAlike license, unless stated otherwise. Cite this article:
Chang San-cheng Facts for Kids. Kiddle Encyclopedia.