Chanute is a city in Neosho County, Kansas, United States. Founded on January 1, 1873, it was named after railroad engineer and aviation pioneer Octave Chanute. As of the 2010 census, the city population was 9,119. Chanute is home of Neosho County Community College. 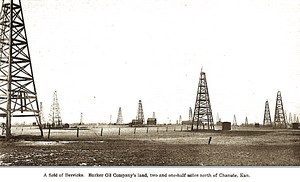 In 1870 when the Leavenworth, Lawrence & Galveston Rail Road (later the Atchison, Topeka & Santa Fe, now the BNSF Railway) crossed the Missouri, Kansas and Texas line within the limits of Neosho county four rival towns sprang up, in the vicinity of the junction: New Chicago, Chicago Junction, Alliance, and Tioga. Two years of the most bitter animosity ensued until the four were consolidated in 1872, and the name of Chanute given it in honor of Octave Chanute, a railroad civil engineer.

Though Chanute was not founded until 1873, settlers had begun populating the area as early as 1856. With the LL&G Railroad set to arrive shortly thereafter, the early residents of the towns of Tioga, Chicago Junction, Alliance, and New Chicago needed an innovative solution to an escalating dispute over which town would claim the right to house the LL&G Railroad's new land office. The towns were unable to settle their differences until an individual by the name of Octave Chanute came to town. Octave was the Chief Engineer and General Superintendent of the LL&G Railroad. In 1872, he suggested the towns merge to end the bickering. On January 1, 1873 the towns merged and became chartered as the City of Chanute.

With the Southern Kansas Railroad locating a division headquarters in Chanute, the city began to flourish. In 1887, Chanute boasted a rapid growth in flourmills, grain elevators, banks, drug and hardware stores, and natural gas. In 1903, the City of Chanute established the electric utility, and in the years to follow, established the gas, water, wastewater,refuse utilities. Ash Grove Cement Company, the sixth largest cement manufacturer in North America, and the largest US-owned cement company, commenced cement manufacture in 1908 in Chanute. In September 2011 Spirit AeroSystems announced the expansion of an assembly facility which will grow to 150 employees in five years and boost the local economy. Chanute is one of only a handful of remaining full-service cities in the State of Kansas.

There were 3,720 households of which 32.4% had children under the age of 18 living with them, 44.1% were married couples living together, 12.6% had a female householder with no husband present, 5.7% had a male householder with no wife present, and 37.6% were non-families. 33.1% of all households were made up of individuals and 15.1% had someone living alone who was 65 years of age or older. The average household size was 2.35 and the average family size was 2.93.

There were 3,864 households out of which 30.6% had children under the age of 18 living with them, 49.9% were married couples living together, 10.8% had a female householder with no husband present, and 35.4% were non-families. 31.7% of all households were made up of individuals and 16.1% had someone living alone who was 65 years of age or older. The average household size was 2.34 and the average family size was 2.92.

The Chanute area has many tourist attractions known for their historical significance.

The Martin and Osa Johnson Safari Museum offers award-winning exhibits and programs that highlight the achievements of Martin and Osa Johnson, pioneering documentary filmmakers, photographers, authors, explorers, and Kansans. A trip to the museum allows one to relive the Johnsons' 1917–1936 adventures in Africa, Borneo and the South Seas. Additional exhibits feature the rich cultures and art of Africa.

The Tioga Suites Hotel was built in 1929 as Kansas' first "fireproof" hotel. All exterior and interior walls, floors and ceilings are masonry or concrete. This Art Deco building is listed on the National Register of Historic Places. It has been completely remodeled and modernized. Known as the "Jewel of Southeast Kansas" it is the hub of many of the community and area activities. It is located in the heart of downtown Chanute.

The Chanute Art Gallery includes more than 1,500 square feet of exhibit area and houses a Permanent Core Collection of more than 500 works of art that includes 25 mediums, representing 135 artists. Special exhibits change every month. Collections include: The Luigi Kasimir Etchings, European and Oriental Art, The Kansas Prairie Printmakers and local and area artists.

The Chanute Historical Museum is commonly known as the Flat Iron Building, this unusual structure is now home to a museum featuring Chanute artifacts. It houses a large genealogy collection and various artifacts from Chanute's colorful history, including an extensive collection of MKT Railroad memorabilia. Members of the Chanute Historical Society opened the museum in June 2005. The collection on display contains sports, railroad and aviation memorabilia.

Both the downtown and historic home districts offer a variety of architectural styles and beautiful examples of restoration. The historic home driving tour takes you down broad, tree-lined streets that make you feel you have stepped back into another era. Chanute's wonderful downtown is filled with historic buildings, most of which have been restored to their original beauty. Chanute also has several examples of WPA projects.

The Cardinal Drug Store in downtown Chanute is the home of one of the oldest original soda fountains in Kansas. It has a collection of Coke memorabilia and medicine bottles. Cardinal is located at 103 East Main Street.

The King Bridge Company constructed the Austin Bridge in 1872. The 160-foot bowstring arch design spanned the Neosho River east of what is now Chanute. Local pioneers invested $15,000 in the bridge for their economic future of getting livestock and crops to the railhead. In 1910 the bridge was moved downstream to the community of Austin. In 1972 it was closed to vehicular traffic, remaining open to foot traffic. On September 15, 1977 the bridge was added to the National Register of Historic Places. In August 1999 the bridge was moved into Santa Fe Park to become the southern terminus of a 3.11 mile hike/bike path. A Federal grant, Neosho County and the City of Chanute funded the project.

Summit Hill Gardens was the first school in Neosho County. Summit Hill was restored and a historic home and modern structure were added to the family residence. It has a flower and herb garden. It is located at 2605 160th Road.

Located in the heart of downtown, this sculpture was dedicated as a gift to the community in September 2003 by the Chanute High School Class of 1941. The sculpture honors engineer and city namesake, Octave Chanute, and the Wright Brothers. Chanute was a mentor to Wilbur and Orville Wright and very influential in the early days of flight exploration. The sculpture measures 23 feet from wingtip to wingtip and 20 feet from nose to tail. The project was in partnership with the City of Chanute.

Major highways running through Chanute are north-south route US-169 and east-west route K-39 (East-West). Chanute is also within 10 miles of two other major north-south highways: US-75 and US-59. These highways provide easy access to I-70 and I-35, the two Interstate Highways passing through Kansas, as well as east-west highway US-400.

The South Kansas and Oklahoma Railroad (SKO) serves Chanute, as well as Southern and Eastern Kansas and Northern Oklahoma. The SKO connects to several major railroads allowing local businesses the opportunity to bid and negotiate their rail transportation costs to acquire the best possible price to all locations throughout North America.

Chanute's Martin Johnson Municipal Airport is a general aviation airport with a 4,255-foot runway and taxiway. Expansion of services and infrastructure is in the planning stages, including new T-hangars and pavement improvements.

All content from Kiddle encyclopedia articles (including the article images and facts) can be freely used under Attribution-ShareAlike license, unless stated otherwise. Cite this article:
Chanute, Kansas Facts for Kids. Kiddle Encyclopedia.