Ranhofer was sent to Paris at the age of 12 to begin his training by studying pastry-making, and at 16 became the private chef for the prince d'Hénin, comte d'Alsace. In 1856 he moved to New York to become the chef for the Russian consul, and later worked in Washington, D.C. and New Orleans.

He returned to France in 1860 for a short time, where he arranged balls for the court of Napoleon III at the Tuileries Palace, but then came back to New York to work at what was then a fashionable location, Maison Dorée. In 1862, Lorenzo Delmonico hired him for Delmonico's Restaurant, and it was there that Ranhofer made his real fame, though others say that he made the fame of the restaurant as well. At that time, Delmonico's was considered the finest restaurant in the United States. He was the chef at Delmonico's until his retirement in 1896, except for a short break from 1876 and 1879 when he owned the "Hotel American" at Enghien-les-Bains. 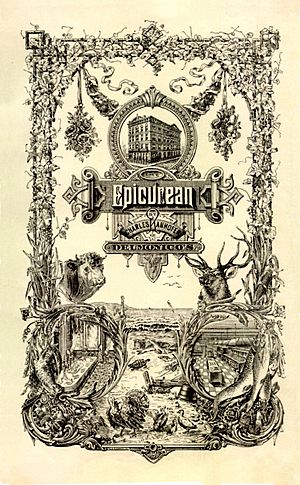 frontispiece of the Epicurean

Ranhofer invented or made famous a number of dishes that Delmonico's was known for, such as Lobster Newberg, and had a talent for naming dishes after famous or prominent people—particularly those who dined at Delmonico's--as well as his friends, and events of the day. Examples include:

Many others may be found under "List of foods named after people."

Ranhofer did not invent baked Alaska, but he popularized it in 1876 when he named it in honor of the newly acquired Alaskan territory.

Ranhofer and his wife Rose had five children: three sons and two daughters. He died at home of Bright's Disease in 1899. He was buried at Woodlawn Cemetery.

All content from Kiddle encyclopedia articles (including the article images and facts) can be freely used under Attribution-ShareAlike license, unless stated otherwise. Cite this article:
Charles Ranhofer Facts for Kids. Kiddle Encyclopedia.