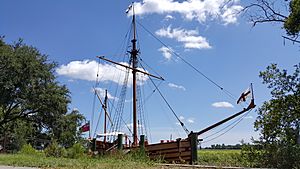 Adventure is a replica of a ketch, a popular style of 17th-century cargo vessel. Similar ships carried commercial goods, foodstuffs, and even livestock between New York, Barbados, and everywhere in between. Renowned 20th century naval architect and historian William Avery Baker designed Adventure in 1969. The first Adventure served Charles Towne Landing from 1970 until 2004. The second Adventure was constructed in 2008 by Rockport Marine in Maine and sailed to Charles Towne Landing in October, 2008.

The Animal Forest, a natural habitat zoo, is home to species indigenous to Carolina in the 1670s. Some of these animals, such as puma and bison, are no longer native to the South Carolina Low Country. Animals at the zoo include: 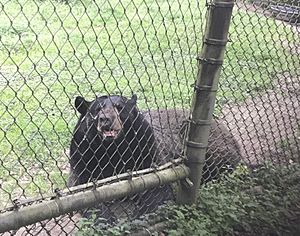 Archaeological finds include Native American, English, and African artifacts. Professional archeology at the site began in 1967, and continues through the present day.

All content from Kiddle encyclopedia articles (including the article images and facts) can be freely used under Attribution-ShareAlike license, unless stated otherwise. Cite this article:
Charles Towne Landing Facts for Kids. Kiddle Encyclopedia.