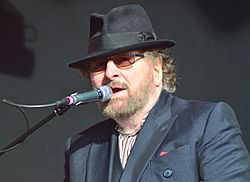 Charles Nicholas "Chas" Hodges (28 December 1943 – 22 September 2018) was an English musician and singer. He was one half of the musical duo Chas & Dave with Dave Peacock. He was the lead vocalist of Chas & Dave from 1975 until his death. The pair released sixteen albums in total. He was born in Edmonton, Middlesex.

In February 2017, Hodges said he had oesophageal cancer. He died of pneumonia complicated from organ failure on 22 September 2018, at the age of 74.

All content from Kiddle encyclopedia articles (including the article images and facts) can be freely used under Attribution-ShareAlike license, unless stated otherwise. Cite this article:
Chas Hodges Facts for Kids. Kiddle Encyclopedia.