HE Cheddi Berret Jagan (22 March 1918 – 6 March 1997) was a Guyanese politician who was first elected Chief Minister in 1953 and later Premier of British Guiana from 1961 to 1964. He later served as President of Guyana from 1992 to 1997. Jagan is widely regarded in Guyana as the Father of the Nation. In 1953, he became the first person of Indian descent to be a head of government outside of South Asia.

Cheddi Berret (Bharat) Jagan was born on 22 March 1918 in Ankerville, Port Mourant, a rural village in the county of Berbice (present-day East Berbice-Corentyne). He was the eldest of 11 children. His parents were Indians who were Kurmi Hindus that immigrated from British India to British Guiana as indentured labourers. They were both from the Basti district in the then North-Western Provinces in the Bhojpuri region of the Hindi Belt in British India (in present-day Uttar Pradesh, India). His mother Bachaoni came to British Guiana as a child with her mother, while his father Jagan also came as a child with his mother and an uncle. The Jagan family lived in rural poverty, working in the cane fields to support themselves. When Jagan was fifteen years old, his father sent him to Queen's College in the capital city of Georgetown (about 160 kilometres (100 mi) away) for the next three years. In Georgetown, Jagan saw life differently, as he came from a different background than that of his schoolmates. After he graduated from high school, Jagan realized that finding a non-agriculture job would be impossible. Finally, his father sent him to the United States to study dentistry with $500, the family's life savings.

Stay in the United States

Jagan left for the United States in September 1936 with two friends, and did not return to British Guiana until October 1943. He lived in Washington, D.C. for two years, enrolled in a pre-dental course at Howard University. To cover his expenses, Jagan took a job as an elevator operator. During the summers, he worked in New York as a door-to-door salesman. Jagan's performance helped him to win a scholarship for his second year at Howard. In 1938, he was admitted to the four-year dental program at Northwestern University in Chicago. 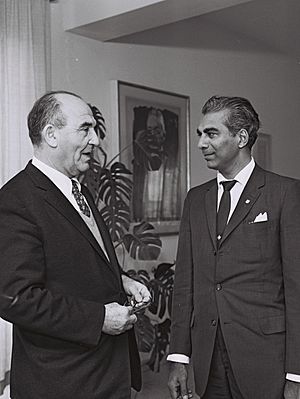 Cheddi Jagan meeting with Levi Eshkol during a visit to Israel in 1961.

Jagan co-founded the Political Affairs Committee (PAC) in 1946, and was subsequently elected to the Legislative Council in November 1947 as an independent candidate from Central Demerara constituency. On 1 January 1950, the People's Progressive Party (PPP) was founded by a merger of the PAC and the British Guiana Labour Party (BGLP), with Jagan as its leader, former BGLP leader Forbes Burnham as its chairman and Jagan's wife Janet as secretary.

Jagan won elections in 1953. However, Winston Churchill was alarmed by fears that Jagan was a Marxist-Leninist, and was convinced Jagan could allow the Soviet Union a foothold in South America. In fact, there is no evidence whatsoever that Jagan had any ties to any foreign communist or revolutionary groups. But still, the fears prompted a British military intervention only days after his victory. Jagan resigned as Chief Minister after 133 days. Britain suspended the constitution and installed an interim government. Jagan's movements were restricted to Georgetown from 1954 to 1957. After a PPP victory in the August 1961 elections, Jagan became Chief Minister for a second time, serving for three years. In the December 1964 elections, the PPP won a plurality of votes, but Burnham's party, the People's National Congress, and the conservative United Force held a majority of seats and were invited to form the government. However, Jagan refused to resign, and had to be removed by Governor Richard Luyt. Having broken off links with Burnham, Jagan was active in the government as a labour activist and leader of the opposition. 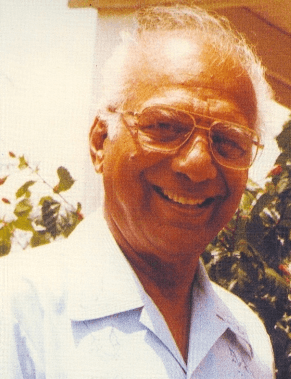 Cheddi Jagan in his later life

After 28 years in opposition, the PPP won the 5 October 1992 elections with about 54% of the vote, and Jagan became President. Contrary to earlier foreign fears, he governed as a democratic socialist and not a Marxist–Leninist.

Jagan suffered a heart attack on 15 February 1997 and was taken to Georgetown Hospital before being flown by U.S. military aircraft then by U.S. Air Force helicopter from Andrews Air Force Base to Walter Reed Army Hospital in Washington, D.C., later that day. He underwent heart surgery there and died in Washington on 6 March 1997, 16 days before his 79th birthday. Prime Minister Sam Hinds succeeded him as President and declared six days of mourning, describing Jagan as the "greatest son and patriot that has ever walked this land".

After graduating from dental school in 1942, Jagan met Janet Rosenberg, a student nurse. They married in 1943, and had two children: Nadira and Cheddi Jr. (who in turn produced five grandchildren).

Janet Jagan followed her husband's footsteps and held the positions of prime minister and president in 1997 (succeeded as president by Bharrat Jagdeo in 1999). 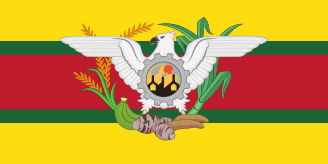 Logo of the Cheddi Jagan International Airport named after him.

Jagan was also an important political author and speechwriter, and his publications include:

All content from Kiddle encyclopedia articles (including the article images and facts) can be freely used under Attribution-ShareAlike license, unless stated otherwise. Cite this article:
Cheddi Jagan Facts for Kids. Kiddle Encyclopedia.