The Chemehuevi Mountains are found at the southeast border of San Bernardino County in southeastern California adjacent the Colorado River. Located south of Needles, California and northwest of the Whipple Mountains, the mountains lie in a north-south direction in general, and are approximately 15 miles in length.

The mountains are located between U.S. Route 95 and the Topock Gorge of the River, just south of Interstate 40. Whale Mountain, at 2,774 feet (846 m), is found at the northern end of the range about five miles east of Lobecks Pass. The Chemehuevi range reaches 3,694 feet (1,126 m) at its highpoint, Chemehuevi Peak, located at the range's extreme southwest, bordering Chemehuevi Valley and Wash, where the valley turns due-east to meet the Colorado River. 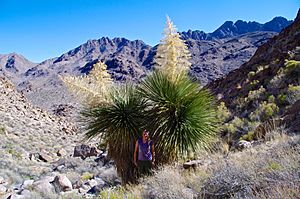 View of canyon and peaks, in the range's southwest. (looking ~north) The large "shrub" is Nolina parryi, endemic to the Lower Colorado River Valley region, in higher, & mostly mountainous elevations. This wash region has produced that large specimen.

The Chemehuevi Mountains Wilderness Area encompasses the rugged, granitic Chemehuevi Mountains. The mountain range is horseshoe-shaped, with the open end facing eastward toward the Colorado River. Contained within the arms of the horseshoe is a large central valley with low rolling hills covered by dense stands of cholla and other cacti, ocotillo, and an occasional agave.

Viewed from the west, the striking light, almost white, granite peaks contrast sharply with the rich green creosote and cactus-covered bajadas. A few miles from the Colorado River, the mountains change dramatically from light-colored granite to dark red and gray volcanic spires and mesas.

All content from Kiddle encyclopedia articles (including the article images and facts) can be freely used under Attribution-ShareAlike license, unless stated otherwise. Cite this article:
Chemehuevi Mountains Facts for Kids. Kiddle Encyclopedia.