The species is widespread in North America, where its range extends from Canada south to Michoacán, Mexico. It is found in every U.S. state except Hawaii. The fast-growing, upright plant can reach heights of more than 3 m. It can be differentiated from most of the other members of its large genus by its honeycomb-pitted seeds, and further separated by its serrated, more or less evenly lobed lower leaves.

Although widely regarded as a weed, this species was once one of several plants cultivated by Native Americans in prehistoric North America as part of the Eastern Agricultural Complex. C. berlandieri was a domesticated pseudocereal crop, similar to the closely related quinoa C. quinoa. It continues to be cultivated in Mexico as a pseudocereal, as a leaf vegetable, and for its broccoli-like flowering shoots. 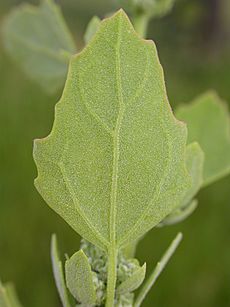 The leaf of C. berlandieri

Chenopodium seeds vary in shape between lenticular and cylindrical. The lenticular shape is more typical of wild members of the species while cylindrical seeds (said to have a "truncated margin") predominate in domesticated varieties.

The species includes two subspecies: the type subspecies (i.e. C. b. ssp. berlandieri) and C. b. ssp. nuttalliae. The latter, which also goes by the common names huauzontle, huauthili and Nuttall's goosefoot, is a domesticated variety cultivated in Mexico.

As many as six extant varieties of C. b. ssp. berlandieri have been identified:

The extinct variety is well-documented, though it may represent more than one taxon:

Additionally, the cultivars of the C. b. nuttalliae subspecies are:

The species is capable of hybridizing with the related introduced European Chenopodium album, which it resembles, giving the hybrid C. × variabile Aellen.

C. berlandieri is the progenitor of all domesticated Chenopodium varieties in North and South America. In prehistoric eastern North America it was a part of the Eastern Agricultural Complex, a set of cultivated and domesticated species which supported sedentary and migrant populations for thousands of years. Archaeological evidence shows the species was extensively foraged as a wild plant in eastern North America as early as 6,500 BC. By 1700 BC, the plant had clearly been domesticated as a pseudocereal crop. The name given to the domesticated variety is C. b. ssp. jonesianum. The oldest evidence for domestication comes from caches of thin-testa seeds from rock shelters in the Ozark Plateaus and Ohio River basin. The goosefoot ceased to be cultivated in most of eastern North America around the time of European contact. The only known potential historic record of C. b. ssp. jonesianum is a c.a. 1720 account by Antoine Simon Le Page du Pratz. According to Le Page, the Natchez people cultivated a grain-like crop called Choupichoul that was delicious, nutritious, highly productive, and required minimal human labor. Multiple lines of evidence suggest that the crop was a domesticated variety of C. berlandieri.

Although cultivation disappeared in eastern North America, C. b. subsp. nuttalliae continues to be cultivated as a domesticated crop in Mexico. Three varieties of the subspecies are grown as a pseudocereal, as a leaf vegetable, and for its broccoli-like flowering shoots, respectively.

The principal difference between wild and domesticated forms of Chenopodium is the thickness of the seed coat. In the domesticated varieties, due to selective pressures during domestication, the testas are less than 20 microns thick; the testas of wild chenopods are 40 to 60 microns thick. This morphological characteristic is shared by the modern cultivated chenopod C. b. subsp. nuttalliae and the archaeological specimens of C. b. ssp. jonesianum. Genetic studies have shown that eastern North American and Mexican cultivated forms have considerable genetic distance between them. Despite the initial assumption of a single domestication event, consensus in the field now supports at least two independent domestication events in North America. Similarly, C. berlandieri's South American branch likely experienced at least two independent domestication events, both of which are called C. quinoa. 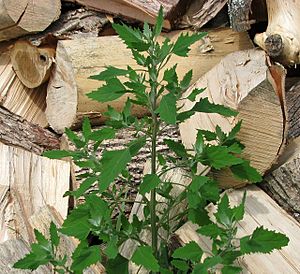 Chenopodium berlandieri growing near a pile of wood in Ontario, Canada.

Chenopodium species have been implicated among the greatest weed threats to agriculture in North America and globally. Most research cites the European species C. album as an herbicide resistant weed threat. The weed status and herbicide tolerance of C. berlandieri is unclear due to difficulty distinguishing species within the subsections Leiosperma (i.e. C. album ) and Cellulata (i.e. C. berlandieri).

As the cultivation of quinoa has spread globally, it has entered geographic regions with extant wild populations of close relatives including C. berlandieri in North America and C. album elsewhere. Proximity of the species allows cross-pollination and the formation of a crop-weed complex. Genetic introgression is often degenerative for both crops and wild plants; however, it can also be an opportunity to develop new crop varieties. Remarkably, the emerging quinoa and C. berlandieri crop-weed complex reflects the prehistoric genetic interaction of domesticated and wild chenopods in eastern North America.

All content from Kiddle encyclopedia articles (including the article images and facts) can be freely used under Attribution-ShareAlike license, unless stated otherwise. Cite this article:
Chenopodium berlandieri Facts for Kids. Kiddle Encyclopedia.