Cherokee Park is a 409-acre (166 ha) municipal park located in Louisville, Kentucky, United States and is part of the Louisville Olmsted Parks Conservancy. It was designed in 1891 by Frederick Law Olmsted, the father of landscape architecture along with 18 of Louisville's 123 parks. Beargrass Creek runs through much of the park, and is crossed by numerous pedestrian and automobile bridges.

According to The Trust for Public Land, Cherokee Park has 500,000 visitors annually, making it tied for the 69th most popular municipal park in the United States.

Cherokee Park opened in 1891, has always been a major draw, and was a key factor in sparking development in nearby parts of town. 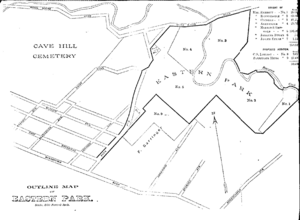 A map of the private land tracts that became Cherokee Park in 1893. Streets renamed since 1893 include Grinstead Drive (Daisy Lane) and Lexington Road (Work House Road).

The land comprising Cherokee Park was originally part of a 4,000-acre (16 km2) military land grant in 1773 to James Southall and Richard Charlton.

A 43-acre (170,000 m2) portion of the land passed to Judge Joshua Fry Bullitt, who sold it in 1868 to foundry magnate Archibald P. Cochran. Cochran established an estate there called Fern Cliff, which operated as a museum for a while but has since been demolished.

As the land was located around Beargrass Creek, it was hilly and ill-suited to farming. Prior to its conversion as a park, the land was used primarily for animal grazing, although much of it was wooded. By 1893 the land was carved into six estates, including Cochran's (which was sold to the city after his death in 1889). The other estates belonged to the Bonnycastle 63 acres (250,000 m2), Barret 20 acres (81,000 m2), Morton & Griswold 106 acres (0.43 km2), Alexander 25 acres (100,000 m2) families, respectively. Those and two small lots under 1-acre (4,000 m2) were bought by 1891. Additional land from the Longest, Barringer and Belknap families would be added to expand the park to its modern size.

In 1887, a city park system was proposed with three large suburban parks: east, west and south. The initial name of the eastern park was to be Beargrass Park, but in 1891, as was fashionable in the late 19th century, a name that evoked the romantic imagery of Native Americans was chosen.

Cochran's name lives on in Cochran Hill, which became notable in the late 1960s when two tunnels were dug under it at a cost of $1.9 million so that I-64 would not have as extreme an impact on the park as it was run through it. The twin tunnels remain, running for about 425 feet (130 m) in length under the hill. Various groups, including one called Save Our Parks, formed as early as the 1940s to oppose running highways through the parks, and were largely responsible for forcing a tunnel as a compromise.

The tunnels, which opened in 1970, are one of three sites in Kentucky deemed "exceptionally significant" by the Federal Highway Administration. This designation, in turn, means it will be very difficult for the stretch of interstate running through the park ever to be widened.

In 2010, a proposal by the city to replace the Hogan's Fountain Pavilion with two smaller structures created public opposition that led to a citizen fundraising effort to repair the existing structure, rather than replace it.

Much of the park was heavily damaged in the April 3, 1974, tornado Super Outbreak. The tornado was an F4 on the Fujita scale. A city forester surveying the aftermath said, "I don't believe that anyone alive today will see Cherokee Park as it was before the storm."

Because of the loss of thousands of mature trees, a massive re-planting effort was undertaken, financed in large part by a grant from the United States government under the Disaster Relief Act of 1974. However, to qualify for these funds, the park had to be restored to its pre-tornado design as faithfully as possible. The original Olmsted plans were consulted for the park's "rebirth" (as it was called at the time), with 2,500 trees and 4,600 shrubs planted in the restoration effort. 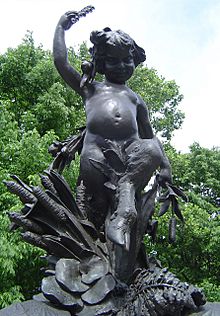 Detail of the Enid Yandell statue at Hogan's Fountain

Cherokee Park contains many landmarks and points of interest. Many are self-contained areas within the larger park, set apart from each other by the natural terrain and creative use of landscaping. Because of the size and design of the park, many events can occur at the same time without interrupting each other.

The park is situated in the Highlands. As the city of Louisville expanded around the park, many developers donated land to the park in exchange for the right to connect roads to it. The numerous entrances have made navigating the park notoriously confusing to visitors. Neighborhoods with entrances to the park include Cherokee Triangle, Bonnycastle, Highlands-Douglass, Crescent Hill and Seneca Gardens. 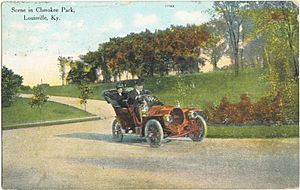 Postcard of a scene from Cherokee Park at the base of Baringer Hill, early 20th century 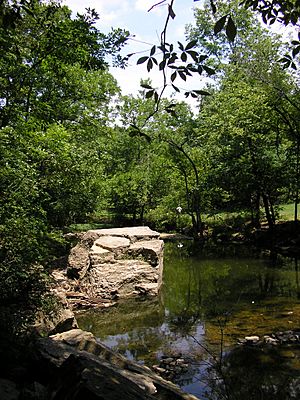 More recently, reports of coyotes in the park have become more widespread. A 2016 Louisville Magazine article noted that "Cherokee Park acts as Costco for coyotes: squirrels, mice and chipmunks in bulk for eating, water to drink and hollow tree trunks or dense thickets galore for shelter."

All content from Kiddle encyclopedia articles (including the article images and facts) can be freely used under Attribution-ShareAlike license, unless stated otherwise. Cite this article:
Cherokee Park Facts for Kids. Kiddle Encyclopedia.