The geological processes that created this region support its diverse history, climate, and ecology. This diversity is also illustrated by the presence of biogeoclimatic zones and a rich population of fish. Canadian Fisheries and many communities within the region such as: Alexis Creek, Hanceville, and the Tŝilhqot’in Nation depend on the diversity of Chilcotin River. In recent years, its diverse history, climate, and ecology has been impacted by a number of environmental concerns such as: increases in flooding, changes in water quality, declines in steelhead trout populations, and an increase in mountain pine beetle outbreaks.

Rocks that form the valley walls suggest that the southward course of the Chilcotin River may have formed during the Late Miocene or Pliocene epochs. The lower reach of the Chilcotin River is home to the Wineglass assemblage and sedimentary rock which is enclosed by older rocks from the Cache Creek terrane. The assemblage is made up of Late Permian tonalitic rock cut through Late Permian volcanic rock. It is unique because its structure and composition correlates to other assemblages (Kutcho and Sitlika assemblages) across British Columbia. The assemblages share similar lithology, an unconformity overlain with sedimentary sequences from the Triassic-Jurassic Periods, and a structural relationship with the overlying Cache Creek Complex. 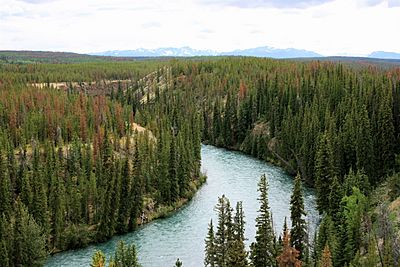 The largest tributary of Chilcotin River is the Chilko River which has a clear blue appearance.

From its headwaters, Chilcotin River has many branches. Some branches are headed towards the western part of Chilcotin Plateau. Approximately 80 km (50 mi) from the Coast Range at altitudes of 3,500 to 4,200 feet, water is gathered from small creeks and lakes. The river flows slightly below the upland region of Punkutlaenkut Lake, then westerly towards the Chezakut where the Clusko comes from the north, flowing southwest and south of Chilcotin Lake. The Chilcotin River flows southwest through a deepening valley where it is met by the outlet of Puntzi Lakes. This occurs at Redstone by Chilanko River. The confluence of Chilko River and its main tributary Taseko River meet the Chilcotin River between Redstone and Alexis Creek. At this point, the Chilcotin River is roughly 200 feet below the surface. The valley in this reach also widens and deepens. At Alexis Creek, the river flows towards a basin as it forms a divide with the Nazko. At this point, the river joins form the north and turns southeast towards Hanceville. The valley becomes more deep until it is 1,800 feet below the level of the plateau. At the Fraser-Chilcotin confluence, Chilcotin is 2,220 feet below plateau-level when it is joined by Big Creek Canyon. Between the confluence with its main tributary the Chilko River and its final confluence with the Fraser River, it is approximately 83 km. Through this reach, the Chilcotin River flows through Bull Canyon, Farwell Canyon, and Big Creek Canyon.

The Chilko-Taseko confluence attracts many visitors because the rivers are coloured differently. Taseko River has a milky appearance where as Chilko River has a clear blue appearance. This site is a recreation favourite as it is used for whitewater rafting.

A hydrometric station in Chilcotin River between Big Creek and the Fraser River confluence reported a mean discharge of 102 m3/s between 1971 and 2018. There have been no active, government-operated hydrometric stations on the river since 2018.

The majority of winter precipitation in the Chilcotin Watershed falls as snow, causing Chilcotin River to experience a pronounced spring and early summer freshet, which is stream flooding due to melting snow. The highest average monthly discharge is nearly 10 times that of the month with the lowest discharge.

The Chilcotin River and its tributaries, most notably the Chilko and Taseko Rivers, are significant for the Indigenous people of the Tŝilhqot’in Nation. The annual migration of salmon in these rivers are relied upon by the Tŝilhqot’in to sustain their communities year round; as a food resource, cultural staple, and economic subsidy. To ensure salmon come back after every fishing season, the Tŝilhqot’in National Government (TNG) and the Canadian Department of Fisheries and Oceans (DFO) practice sustainable harvesting and monitor the rivers regularly. However, progressively smaller harvesting outcomes in recent years followed by an assessment done by the Committee on the Status of Endangered Wildlife in Canada (COSEWIC) has prompted the TNG to shut down their fishery operations for 2021 and presently, fishing in the Chilcotin River has seized.

Sub-Boreal Pine-Spruce biogeoclimatic zone covers 40% of the Chilcotin River watershed. The headwaters of the Chilcotin River are in a Montane-Spruce zone, and the lowest reach where it confluences with the Fraser River is dominated by Bunchgrass. The river also passes through a zone of Interior Douglas-Fir. Over 40% of the watershed area is covered by pine tree species.

The Chilcotin River supports populations of coho, chinook, and sockeye salmon, the first two of which are considered threatened by COSEWIC. Salmon are an important cultural, food, and economic resource for the Tŝilhqot’in Nation.

Population declines are a result of factors such as interception by fisheries and competition with hatchery species while out at sea, as well as predation by pinnipeds. Declining habitat quality and interference in spawning pathways by landslides are other contributors.

In July 2019, the Chilcotin River and surrounding communities experienced extreme rainfall. Subsequent flooding led to mudslides, inundated roadways and the destruction of culverts. Residents were cut off, leaving over 300 people stranded and 120 properties destroyed.

Water quality is complicated and stressors such as climate change and human development can have adverse impacts. Recently, the Chilcotin River monitoring site has seen increases in metal concentrations. There is not a lot of human development in this area but scientists are investigating the cause or driver of this change, noting that increases in sediments because of changes in streamflow could be an element.

British Columbia experiences recurring outbreaks of mountain pine beetle (MPB) populations, with the largest infestations occurring in central BC. MPB cause widespread tree mortality that also raise the risk of wildfire occurrence and poses a substantial threat to the timber supply industry. Within central BC, the Chilcotin Plateau has already experienced two major MPB outbreaks, first in the mid 1970s - 1980s, and the second in the early 2000s ending in 2010. A team of researchers studying post-MPB infested forests in the Chilcotin Plateau found that although the dominant tree species weren't eradicated, MPB outbreaks in the future would make forests unusable for the timber industry in the long term.

All content from Kiddle encyclopedia articles (including the article images and facts) can be freely used under Attribution-ShareAlike license, unless stated otherwise. Cite this article:
Chilcotin River Facts for Kids. Kiddle Encyclopedia.