Chip and Dale Towers are two 300-foot (91-meter) tall sandstone towers located in the Island in the Sky District of Canyonlands National Park, in San Juan County, Utah. Dale Tower rises to an elevation of 5,620 feet (1,710 meters), whereas the lower Chip Tower is 5,420-feet. Airport Tower is set 2.5 mi (4.0 km) to the southwest, and Dead Horse Point State Park overlook is situated 4.5 mi (7.2 km) to the north-northeast. Chip and Dale Towers are an eroded fin composed of hard, fine-grained Wingate Sandstone, which is the remains of wind-borne sand dunes deposited approximately 200 million years ago in the Late Triassic. This Wingate Sandstone overlays a softer layer of the Chinle Formation. Access to the towers is via the four-wheel drive White Rim Road, and a scramble to reach the base. The top of the towers rise over 1,000 feet above the road in approximately one-half mile. Precipitation runoff from Chip and Dale Towers drains east to the nearby Colorado River.

The first ascent of 240-foot Chip Tower was made in October 1993 by Jeff Widen and Jeff Singer via Stuffin Nuts, (III, class 5.9, A2) on the south face. The first ascent of 330-foot Dale Tower was made October 2, 1994, by Jeff Widen, Cameron Burns, and Jeff Singer, via Boy's Night Out, (III, 5.9, Al, 3 pitches). The National Park Service temporarily closes access to these climbing routes to protect wildlife habitat for lambing desert bighorn sheep and nesting raptors season (March through August).

According to the Köppen climate classification system, the towers are located in a Cold semi-arid climate zone, which is defined by the coldest month having an average mean temperature below −0 °C (32 °F) and at least 50% of the total annual precipitation being received during the spring and summer. This desert climate receives less than 10 inches (250 millimeters) of annual rainfall, and snowfall is generally light during the winter. 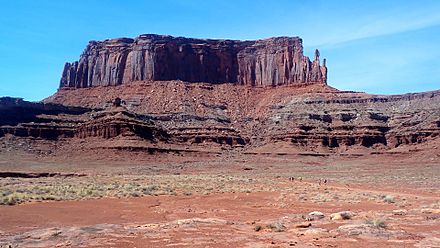 Point 5931 with Chip and Dale Towers to right

All content from Kiddle encyclopedia articles (including the article images and facts) can be freely used under Attribution-ShareAlike license, unless stated otherwise. Cite this article:
Chip and Dale Towers Facts for Kids. Kiddle Encyclopedia.