Chipmunk Mountain is a mountain in southwestern British Columbia, Canada, located 23 km (14 mi) southwest of Bralorne. It has an elevation of 2,390 m (7,840 ft) and a topographic prominence of 540 m (1,770 ft), making it the highest point on an east-trending screed ridge. This horn-like rocky tower is similar to The Black Tusk in Garibaldi Provincial Park.

The mountain was named in 1920 by James Landsborough after a summit party had given lunch scraps to a chipmunk. 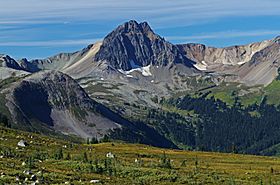 All content from Kiddle encyclopedia articles (including the article images and facts) can be freely used under Attribution-ShareAlike license, unless stated otherwise. Cite this article:
Chipmunk Mountain Facts for Kids. Kiddle Encyclopedia.