Chocolate salami is an Italian and Portuguese dessert made from cocoa, broken biscuits, butter, eggs and sometimes alcohol such as port wine or rum. The dessert became popular across Europe and elsewhere, often losing alcohol as an ingredient along the way. 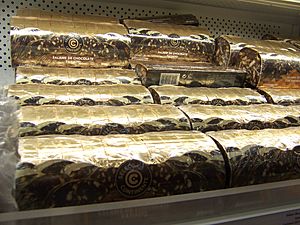 Packaged chocolate salami at a supermarket in Évora, Portugal

Chocolate salami is not a meat product. The appellation "salami" stems from physical resemblance. Like salami, chocolate salami is formed as a long cylinder and is sliced across into discs for serving. These discs are a brown, chocolaty matrix (like the red meat of salami) peppered with bright bits of cookie (like the white flecks of fat in salami). In Portugal, they are typically made using Marie biscuit. Some varieties also contain chopped nuts, such as almonds or hazelnuts and may be shaped like truffles.

In Greece, chocolate salami is called mosaiko or kormos.

In Turkey, it is called mozaik pasta (Mosaic Cake).

In Romania, it is called salam de biscuiți (biscuit salami), and it may have originated during the 1970s or 1980s in the communist era, possibly as a result of food shortages.

In Jordan, it is known as lazy cake, which is usually made with a brand of biscuit called Marie.

In Uruguay, it is called salchichón de chocolate (chocolate sausage).

In Portugal, it is called salame de chocolate (chocolate salami).

In Lithuania, a similar dessert is called tinginys (Lithuanian: lazy), which is made out of cocoa, broken biscuits, condensed milk and butter, and sometimes nuts, however alternative recipes exist under the same name of the dish.

All content from Kiddle encyclopedia articles (including the article images and facts) can be freely used under Attribution-ShareAlike license, unless stated otherwise. Cite this article:
Chocolate salami Facts for Kids. Kiddle Encyclopedia.