Christian Andreas Doppler ( 29 November 1803 – 17 March 1853) was an Austrian mathematician and physicist. He is celebrated for his principle – known as the Doppler effect – that the observed frequency of a wave depends on the relative speed of the source and the observer. He used this concept to explain the color of binary stars.

Doppler was born in Salzburg (today Austria) in 1803. After completing high school, Doppler studied philosophy in Salzburg and mathematics and physics at the Imperial–Royal Polytechnic Institute (now TU Wien), where he became an assistant in 1829. In 1835 he began work at the Prague Polytechnic (now Czech Technical University in Prague), where he received an appointment in 1841. 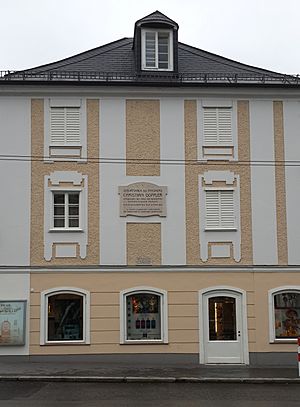 Doppler's birth house in the Makart square in Salzburg, just next door to where Mozart's family had lived. A Doppler research-and memorial society is now housed there. 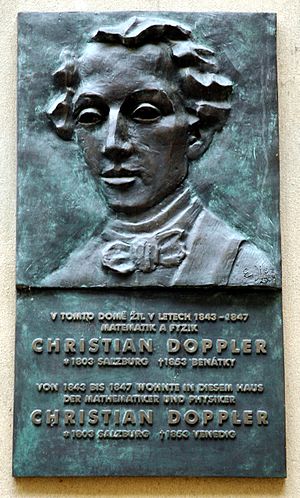 One year later, at the age of 38, Doppler gave a lecture to the Royal Bohemian Society of Sciences and subsequently published his most notable work, Über das farbige Licht der Doppelsterne und einiger anderer Gestirne des Himmels ("On the colored light of the binary stars and some other stars of the heavens"). There is a facsimile edition with an English translation by Alec Eden. In this work, Doppler postulated his principle (later coined the Doppler effect) that the observed frequency of a wave depends on the relative speed of the source and the observer, and he later tried to use this concept for explaining the colour of binary stars.

Physicist Armand Hippolyte Louis Fizeau (23 September 1819 – 18 September 1896) also contributed to aspects of the discovery of the Doppler effect, which is known by the French as the Doppler-Fizeau Effect. Fizeau contributed towards understanding its effect with light and also developed formal mathematical theorems underlying the principles of this effect. In 1848, he predicted the frequency shift of a wave when the source and receiver are moving relative to each other, therefore being the first to predict blue shifts and red shifts of spectral lines in stars.

Doppler continued working as a professor at the Prague Polytechnic, publishing over 50 articles on mathematics, physics and astronomy, but in 1847 he left Prague for the professorship of mathematics, physics, and mechanics at the Academy of Mines and Forests (its successor is the University of Miskolc) in Selmecbánya (then Kingdom of Hungary, now Banská Štiavnica, Slovakia), and in 1849 he moved to Vienna.

Doppler's research was interrupted by the revolutionary incidents of 1848. During the Hungarian Revolution, he fled to Vienna. There he was appointed head of the Institute for Experimental Physics at the University of Vienna in 1850. While there, Doppler, along with Franz Unger, influenced the development of young Gregor Mendel, the founding father of genetics, who was a student at the University of Vienna from 1851 to 1853.

Doppler died on 17 March 1853 at age 49 from a pulmonary disease in Venice (at that time part of the Austrian Empire). His tomb, found by Dr. Peter M. Schuster, is just inside the entrance of the Venetian island cemetery of San Michele.

Some confusion exists about Doppler's full name. Doppler referred to himself as Christian Doppler. The records of his birth and baptism stated Christian Andreas Doppler. Forty years after Doppler's death the misnomer Johann Christian Doppler was introduced by the astronomer Julius Scheiner. Scheiner's mistake has since been copied by many.

On 29 November 2017, Google celebrated his 214th birthday with a Google Doodle.

All content from Kiddle encyclopedia articles (including the article images and facts) can be freely used under Attribution-ShareAlike license, unless stated otherwise. Cite this article:
Christian Doppler Facts for Kids. Kiddle Encyclopedia.