Christies Beach is a seaside suburb in the southern Adelaide metropolitan area, within the City of Onkaparinga. The area is scenic and hence popular with photographers as Witton Bluff provides a natural vantage point over the entire suburb and beyond.

Christies Beach has its own postcode of 5165, and is adjacent to the suburbs of Christie Downs and Noarlunga Centre to the east, Port Noarlunga to the south, and O'Sullivan Beach to the north.

The very first development to occur along the coast of Christies Beach can be traced back to pre-colonization times, almost 40,000 years ago. The indigenous Kaurna people used the coastal area of Christies Beach (at the time known as Mullawirratingga) as a place for seasonal residence. They constructed structures known as a ‘Wodli’, which are small shelters made of branches and leaves. These structures were semi-permanent, only lasting the length of the summer period, after which they were then disassembled (City of Onkaparinga, 2005).

The first European development along the Christies Beach coastline was constructed in the 1830s. A whaling station was constructed along the coast, influenced by the rising price of whale bone overseas, the abundant Southern Right Whale population during the summer breeding season and the vantage point of Gulf St Vincent from Witton Bluff. By the 1840s the seasonal whale population dwindled down to unprofitable levels with the whales changing their migration route, and the whalers left the area to pursue other activities (Colwell, 1972) (Towler, 1986).

An area of surveyed land covering Glenelg to Witton Bluff (Christies Beach) known as District B, was made available for settlement in 1838. Many farmers took plots of land along the Anderson Creek (now known as Christies Creek). In 1895 Lambert Christie and his wife Rosa established a farm that covered the area where Christies Beach is now situated. The entire area remained a land of farming communities until 1923. This is when Rosa Christie created the first subdivision in the area, it was named Christie Beach. With this subdivision and other such residential allocations in the area road and rail transportation was improved. The improvement in transportation south of Adelaide gave Christies Beach an increase in tourists and holiday makers who were looking for a coastal experience. Many tourists decided to build cottages and holiday shacks on Witton Bluff and down onto the beach itself (City of Onkaparinga, 2005). 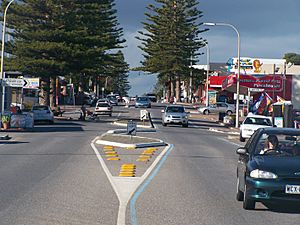 Beach Road commercial district looking up from the beach

With the influx of visitors and new residents to the area the Christies Beach Progressive Association was formed to provide good foreshore amenities, such as beach access, toilets, showers, etc. Foreshore developments led to the creation of new shops and services on the Esplanade and nearby Gulfview and Beach Roads. By the late 1950s demand for residence in the area skyrocketed, this propelled commercial and industrial developments in the Lonsdale district with the opening of Port Stanvac Oil Refinery and Chrysler (later Mitsubishi) engine plant and also in Noarlunga with the relocation of the train line and the construction of Colonnades Shopping Centre (Colwell, 1972) (City of Onkaparinga, 2005).

Existing foreshore developments include toilet facilities, benches, shelter, barbecue facilities, native vegetation plantations, fencing, informational signage, beach access stairs, & paved footpaths on both sides of the Esplanade. Recently all overhead power lines along the Esplanade have been converted to underground power lines to improve the scenic value of the foreshore. Future development plans for the Christies Beach foreshore established under the Metropolitan Coast Park Plan include the allocation of parking areas to remove on the side of the road parking, continued planting of native vegetation and the creation of more open recreation grass spaces, & converting the footpath into a multi-recreational path that can be used by walkers and cyclists alike and is connected to similar coastal paths along coasts further north and south, & changing the flow of traffic along the coast so as to turn it into a recreational road, rather than a thoroughfare.

The Morrow Road bridge over Christies Creek, a Local Heritage place, was once the main road bridge linking Christies Beach to O'Sullivan Beach. The structure is thought to be the only remaining example of a wooden road bridge in the former Noarlunga Council area. 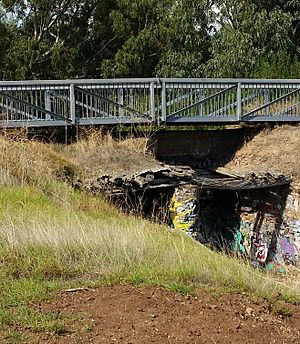 Situated on Galloway Road between Gulf View Road and Carmichael Road, Lohmann Park is home to "The Rainmakers", a statue of bronze Aboriginal warriors. The sculpture was gifted to the people of Noarlunga City Council by Eugen Lohmann Esq., the Governing Director of Wender and Duerholt, a (West) German building company which had built a number of South Australian Housing Trust homes in the area. The statue was unveiled by then Premier of South Australia, Frank Walsh, on 21 May 1965.

Also located in the park is a memorial to former City of Onkaparinga councillor Alan Oakes.

All content from Kiddle encyclopedia articles (including the article images and facts) can be freely used under Attribution-ShareAlike license, unless stated otherwise. Cite this article:
Christies Beach, South Australia Facts for Kids. Kiddle Encyclopedia.