Chudleigh is a small town in Central Devon, England between Newton Abbot and Exeter. The electoral ward with the same name had a population of 6,125 at the 2011 census.

Chudleigh is very close to the edge of Dartmoor and in the Teign Valley. Nearby Castle Dyke is an Iron Age Hill Fort which demonstrates far earlier settlement in the area. It is also near Haldon Forest, a Forestry Commission property.

The town has been bypassed by the A38 road since 1972. It has expanded a good deal in recent years as commuter houses have been built around its edges, but still retains a fairly traditional village centre. 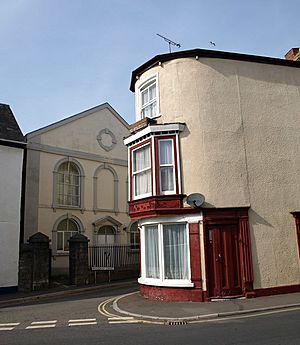 A chapel and a house

Local amenities include an outdoor swimming pool, cricket field, football pitches, allotments, a skate park, two doctors' surgeries, a dentist and a library. There is a primary school located in the town.

Nearby "the Rock" is a natural beauty spot and attracts rock climbers who scale the range of routes on the (limestone) crag.

Chudleigh is bypassed by the A38. The original A38 still runs from a point near to Chudleigh railway station, through the centre of the town as far as Harcombe Cross. The current northbound A38 follows the old route to the top of Haldon Hill. Chudleigh's proximity to the A38 makes it a viable commuter town for residents working in Newton Abbot, Plymouth and Exeter. The A38 meets the M5 6 miles (10 km) to the north at Exminster. Also nearby is the A380 which provides a connection to Newton Abbot and Torbay.

Chudleigh railway station, on the Teign Valley Line, opened in 1882, but was closed to passengers in 1958. The nearest station is now 7 miles (11 km) away at Newton Abbott. That station is served by Great Western Railway trains to Penzance and London Paddington, and CrossCountry services to the North, as well as local services to Teignmouth, Dawlish, Torbay, Barnstaple and Exmouth.

The nearest airport is Exeter International Airport which is 14.5 miles (23 km) away.

The earliest written record of a Carnival in Chudleigh in the Council Minutes is an entry of 7 November 1910, asking for free use of the town hall but offering to pay for gas used. Monies raised were to go to local hospitals. However, in The South Devon Weekly Express of 8 September 1950, Arthur Holcombe states the First Carnival was held in 1908 on Thursday 16 November. There is uncertainty of exactly when it was moved to the Summer. Twenty tableaux entered and the length of the procession extended for 400 yards. The Tiverton town band and the Chudleigh Brass Band marched and played in the parade.

No carnival was held during the First or Second World Wars. Following the procession of 1961 the build up of traffic, due to the road closure whilst the parade took place, was so bad that the police and local authorities decided that such a situation could not be tolerated. At that time the A38 ran through Chudleigh town centre and holiday traffic was estimated to tail back 25 miles to Honiton.

Carnival weeks and processions continued annually and during the 1970s the carnival association was formed. It comprises other towns and villages in the area which hold similar weeks and each have their own Carnival Queen and Royalty/tableau. These floats attend the Carnival processions and are judged at each by different representatives. During the latter half of the 1990s Chudleigh Carnival committee created floats that won the shield one year and completed consistently in other years.

Carnival Committees, whilst strong at times, struggle to attract a sufficient number of members in other years. Although financially secure, such has been the case in Chudleigh of late with difficulty attracting fresh committee members. Having seen other towns give up on carnivals, in 2006 no carnival week or procession was held for this very reason. 2007 witnessed a change of fortune and, although unable to attend other processions in the region, the carnival week and parade were held and were quite successful. In 2007 new members joined and 2008 saw a new carnival float once again attending other processions and Chudleigh claimed the South Devon shield for 2008. 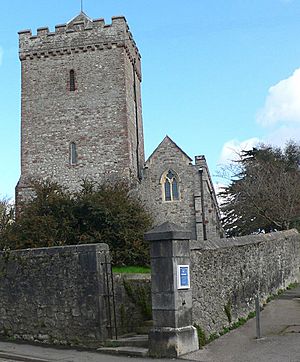 The church of St Martin and St Mary was consecrated in 1259. The structure is medieval but was heavily restored in 1868. The rood screen has paintings of saints and prophets and the Courtenay coat of arms.

In 1887 St Bridget's Abbey of Syon built a monastery, known as Chudleigh Abbey, which they occupied until 1925.

The heated outdoor community swimming pool is in the grounds of Chudleigh Primary School and is open to the public all summer.

The weather conditions in Devon in the year 1807 have been described as a drought. Weeks without rain left many people short of water and had farmers worrying about their crops. At around noon on 22 May, a small fire broke out in pile of furze stacked near the ovens at a bakery in Culver Street (now New Exeter Street). According to later reports,the staff in the bakery seemed unaware of the danger this posed, but the fire, fed by the exceptionally dry fuel, exploded. In the shortest time imaginable, the fire had spread to the roof of the bakery (thatched, as were 90% of the houses in Chudleigh at the time) and huge hunks of burning reed and straw were swept aloft by a rapidly growing north-easterly wind.

After the fire, only the church and seven houses were left standing.

The village's name is spoofed as "Chudley" in the Harry Potter books. The Chudley Cannons are one of only thirteen Quidditch teams that have been playing in the professional Quidditch League of Britain and Ireland that was established in 1674. The team players wear bright orange robes emblazoned with a speeding cannonball and a double "C” in black. The last time they won the League was 1892.

All content from Kiddle encyclopedia articles (including the article images and facts) can be freely used under Attribution-ShareAlike license, unless stated otherwise. Cite this article:
Chudleigh Facts for Kids. Kiddle Encyclopedia.