Church of St. James the Less facts for kids

The Church of St. James the Less is a historic Episcopal church in Philadelphia, Pennsylvania, that was architecturally influential. As St. James-the-Less Episcopal Church, it was designated a National Historic Landmark for its Gothic Revival architecture, which influenced a generation of subsequent churches.

Philanthropist and merchant Robert Ralston wanted to found a church near his land on Ridge Road, but died shortly before this church's founding. His friend Samuel Jarvis had helped found the General Theological Seminary in New York and knew about the Cambridge Camden Society. This congregation was admitted to the Episcopal Diocese of Pennsylvania on 22 May 1846 and on 26 September 1846, took the corporate name of "Rector, Church Wardens and Vestrymen of St. James the Less." The new congregation acquired land from nearby Laurel Hill Cemetery and wanted to build a church that could serve not only the wealthy families with mansions overlooking the Schuylkill River or on Hunting Park Avenue, but also working-class people of the nearby industrial neighborhood now known as Allegheny West.

The parish was traditionally High Church. It did not install gas lighting in 1869, but did allow oil lamps to replace the original candles circa 1885. Further modernization occurred in the early 20th century, including not only the tower and chimes (dedicated 1910) but also electric lighting and central heat circa 1913. Documents concerning its Anglo-Catholic practices in the early 20th century. 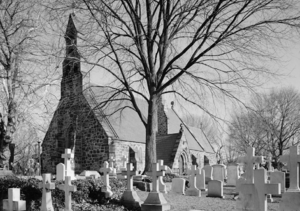 HABS Front view of the church in 1972

The building was added to the list of National Register of Historic Places in 1974 and designated a National Historic Landmark in 1985. The National Park Service called it "the first example of the pure English Parish church style in America, and one of the best examples of a 19th-century American Gothic church for its coherence and authenticity of design. Its influence on the major architects of the Gothic Revival in the United States was profound." 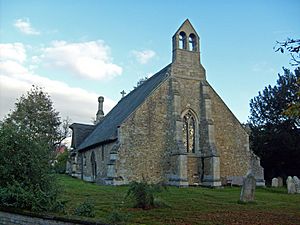 The Gothic architecture was nearly accidental. The congregation applied to the Cambridge Camden Society, which in 1841 and 1844 had published a widely circulated pamphlet on modern church design, for a set of approved plans. Originally an organization formed by Cambridge University students interested in gothic architecture, the group advocated combining the piety of gothic architecture with church reform associated with the Oxford Movement. It was inadvertently sent measured drawings prepared by English architect George Gordon Place for St. Michael's Church in Longstanton, Cambridgeshire, built c. 1230, which were then followed in every detail under the supervision of architect John E. Carver. Later American churches on the National Register of Historic Places influenced by St. James' design include All Saint's Memorial Church (Navesink, New Jersey) (designed by Richard Upjohn first President of the American Institute of Architects) and St. Peter's Episcopal Church (Neligh, Nebraska).

Set on the edge of a hill, north of Mount Vernon Cemetery and east of Laurel Hill Cemetery, the setting for the church is no longer rural. West Hunting Park Avenue, a major artery, is just beyond the churchyard's south wall, and industrial buildings lie to the west. Now, however, the shady and quiet churchyard is considered an urban oasis.

The Wanamaker Memorial Bell Tower and mausoleum (1908), designed by John T. Windrim, houses a set of J.C. Deagan, Inc. tower chimes and a chime of bells by the McShane foundry. A parish hall, which later housed the parish school, was built on the opposite side of West Clearfield Street.

The congregation of St James the Less began withholding diocesan payments in protest over the ordination of women. After the bishop refused to renew the preaching license of assistant Rev. Willis in 1999, the congregation attempted to form a nonprofit corporation and transfer the church property into it. In 2001, the diocese initiated litigation to seize its property and two years later the Philadelphia County Court of Common Pleas ruled that the attempted merger was ultra vires and invalid. The breakaway congregation lost two subsequent appeals, first to Commonwealth Court and then to the Supreme Court of Pennsylvania. After the Supreme Court's decision, the Diocese assumed control of the St. James property. In 2008 the diocese's Standing Committee voted to allow historic St. Mark's Church in Philadelphia's center city neighborhood to adopt the Church of St. James the Less as a mission. Weekly celebration of Mass resumed on Sundays at 5:00 pm. The breakaway congregation largely entered the Roman Catholic Church under the provision of the Personal Ordinariate of the Chair of St. Peter established by Pope Benedict.

During the controversy, the parish school closed circa 2006. As part of its mandate, Saint Mark's Church began a fundraising effort to open a new parish school to serve this local community. In 2009 and 2010, the St. Mark's congregation (together with St. Francis Episcopal Church in Potomac, Maryland) sponsored Vacation Bible School at the historic church school. The following fall a successful after-school program began, staff were hired, and renovations began. In September 2011 Saint James School, covering grades 5 to 8 opened. It is part of the NativityMiguel Network of Schools and The National Association of Episcopal Schools neighborhood. 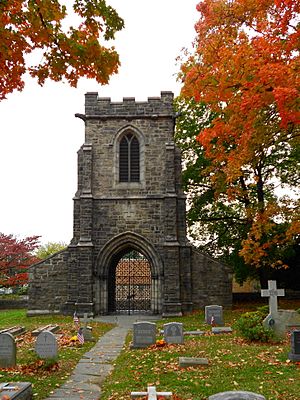 The surrounding churchyard is the final resting place of several notable people. The cemetery is open to the public when the school is in session, generally weekdays from 7am-6pm, and on the weekends during school events.

All content from Kiddle encyclopedia articles (including the article images and facts) can be freely used under Attribution-ShareAlike license, unless stated otherwise. Cite this article:
Church of St. James the Less Facts for Kids. Kiddle Encyclopedia.