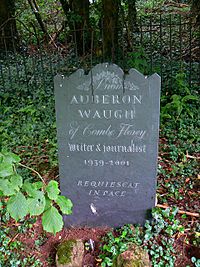 The Church of St Peter & St Paul in Combe Florey, Somerset, England has some remains from the 13th century but is mostly from the 15th century and is designated as a Grade I listed building.

The church is built of Old Red Sandstone with Hamstone around the windows and doorways. It has a three-bay nave with north aisle and west three-stage tower. The chancel is of Victorian construction. The interior includes several monuments, one of which is attributed to John Michael Rysbrack, and three stone effigies which date from the 14th century.

Sydney Smith was rector of the Church of St Peter and St Paul from 1829 until his death in 1845.

The Anglican parish is part of the benefice of Bishop's Lydeard with Lydeard Saint Lawrence, Bagborough, Combe Florey and Cothelstone within the Taunton archdeaconry.