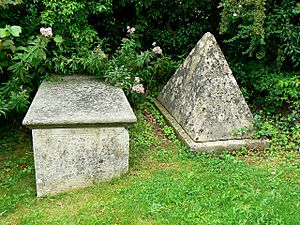 The Church of St. Thomas à Becket is a Church of England parish church of Box, Wiltshire in southwest England. It is one of a number of churches named after Thomas Becket following his martyrdom after having previously been dedicated to the Virgin Mary. It is a Grade I listed building. The church has 12th-century origins and was substantially remodelled in the 14th, 15th, 18th and 19th centuries.

The church is adjacent to a ruined Roman villa. There was evidence of St Aldhelm working in the area and there was an Anglo-Saxon church constructed in the area with a Norman church later being erected to replace it. There it was given the parish name of Ditchridge. Following the Norman Conquest of England, King William I of England gave the land and church to William De Ow. It was rebuilt in 1158 using stone from the nearby Hazelbury quarry. It was originally dedicated to the Virgin Mary but following the martyrdom of the Archbishop of Canterbury Thomas Becket, a small chapel dedicated to him was constructed nearby in 1190. As Box was on the route to the shrine of Thomas Becket at Canterbury Cathedral, Kent for pilgrims, by the end of the 13th century, it was rededicated to Thomas Becket. The chapel was renamed Hazelbury Chapel following the church's re-dedication.

In the 15th century, the tower was heightened with a bell installed and restoration took place in 1713. In 1831, due to the church being too small to meet demand the Victorians expanded the church. In 1896 Harold Brakspear carried out a renovation of the church. The high pews were removed and lowered along with the floor. The plaster on the wall was removed to reveal hidden memorials and 14th century encaustic tiles in the chancel which were also restored. The restoration cost £3,500 (£290,000 in 2018). The Hazelbury Chapel was restored in 1926. In 1960, English Heritage granted the Church of St Thomas à Becket grade I listed status.

Grave markers in the churchyard date to the seventeenth century. There are numerous mounds in which bodies were buried one atop the other; in keeping with medieval custom, these double burials were always situated on the south side of a church "as no-one wanted the shadow of the Church to fall on his grave". According to legend, a pyramidical tombstone in the churchyard was contrived to prevent the deceased's wife from dancing on his grave.

Burials in the churchyard slowed to a trickle after the opening of the Box cemetery in 1858.

All content from Kiddle encyclopedia articles (including the article images and facts) can be freely used under Attribution-ShareAlike license, unless stated otherwise. Cite this article:
Church of St Thomas à Becket, Box Facts for Kids. Kiddle Encyclopedia.