Cimarron Ridge is a ridge in the San Juan Mountains in southwestern Colorado. The ridge runs north-south and occupies parts of Gunnison, Montrose, Ouray, and Hinsdale counties. The ridge parallels U.S. Highway 550, and parts of the ridge can be seen from points along the highway. 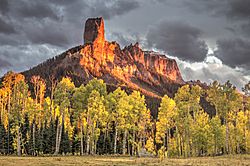 Peaks along the ridge include Courthouse Mountain, elevation 12,172 ft (3,710 m), and Chimney Rock, elevation 10,958 ft (3,340 m). Chimney Rock is known for appearing in the 1969 western motion picture True Grit and is considered among the most difficult peaks to climb in Colorado.

The ridge is made up of green and gray tuff breccia and is the "erosional remains of a larger volcanic pile that surrounded several volcanoes."

All content from Kiddle encyclopedia articles (including the article images and facts) can be freely used under Attribution-ShareAlike license, unless stated otherwise. Cite this article:
Cimarron Ridge Facts for Kids. Kiddle Encyclopedia.