In the 1920s and 1930s, forest road networks were not well developed. To facilitate work in National Forests, the Forest Service built district ranger stations at strategic locations within the forest to house full-time employees and provide logistics support to fire patrols and project crews working at remote forest sites. After World War II, the Forest Service greatly expanded its road network, allowing employees to get to most forest areas within a few hours. As a result, many of the more isolated ranger stations were closed or converted to summer guard station.

The Forest Service began using the Clackamas Lake site in 1905. The original ranger cabin and barn were built by the district's first ranger, Joe Graham, in 1906. The compound was expanded during the 1930s by the Civilian Conservation Corps. All of the historic buildings that exist at the site today are from that era. The range station served as the summer administrative site for the Clackamas Lake Ranger District from 1906 until the 1952 when the compound was converted to a guard station for fire crews and work parties. After a short period of disuse in the 1960s, the guard station was reopened in the early 1970s. Since then, the site has remained in continuous use as a guard station, work center, recreation facility, and visitor center.

Because of the rustic architecture of the buildings and the site's unique historic value as an early Forest Service ranger station, the Clackamas Lake Ranger Station compound was listed as a historic district on the National Register of Historic Place in 1981. The historic area covers 4 acres (16,000 m2). 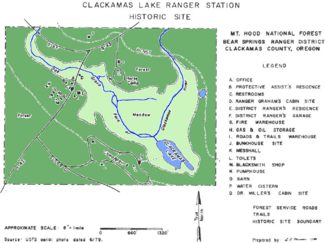 The ranger station is made up of eleven historic buildings and twelve other rustic, but non-historic, structures. In addition, the original ranger station landscaping still exists including picnic tables, a horseshoe pit, and stone fire pit. The historic district originally had twelfth historic building, but one ranger residence was destroyed by fire in 2003.

The ranger station's historic buildings include the district office, two ranger residences, a mess hall, a fire equipment warehouse, a separate road-and-trail warehouse, a gas station, garage, blacksmith shop, horse barn, and a pump house across the meadow. The district office is now a visitor center and museum. The ranger's residence can be rented by the public for $80 per night per on weekdays and $100 per night on weekends and holidays. Volunteer caretakers live on site, and help maintain the historic buildings, staffs the visitor center, and provide interpretive tours of the compound.

The ranger station buildings are wood and log-frame structures with concrete foundations. The exteriors are covered with wood shingles. Wooden shingles are also used for roofing. All the buildings are painted dark brown with dark brown trim so they blend into the surrounding forest landscape.

There is also a Forest Service campground next to the historic Clackamas Lake Ranger Station. The campground has 46 camp sites, potable drinking water, and several modern restrooms. The ranger station and campground are only a short distance to Clackamas Lake, and just three miles (5 km) from the much larger and very popular Timothy Lake. Trails for hiking, horseback riding, or mountain biking can easily be reach from the compound.

The Clackamas Lake Ranger Station is located in the a remote area of the Mount Hood National Forest, fifty miles southeast of Sandy, Oregon and twenty-two miles south of Government Camp, Oregon. The elevation at the site is 3,400 feet (1,000 m). The forest around the guard station is dominated by old growth Douglas fir.

To get to the Clackamas Lake Ranger Station from Sandy, travel east on U.S. Route 26 for approximately 40 miles (64 km). Turn right onto Forest Road 42 (also known as Skyline Road) and travel south for 11 miles (18 km) past the intersection of Forest Roads 42 and 57. The historic Clackamas Lake Ranger Station is on the left, 1/4 miles past the junction. The ranger's residence is on the east side of the road across from the visitor center.

All content from Kiddle encyclopedia articles (including the article images and facts) can be freely used under Attribution-ShareAlike license, unless stated otherwise. Cite this article:
Clackamas Lake Ranger Station Historic District Facts for Kids. Kiddle Encyclopedia.