Kids Encyclopedia Facts
Not to be confused with Claremont, California, the incorporated city in eastern Los Angeles County. 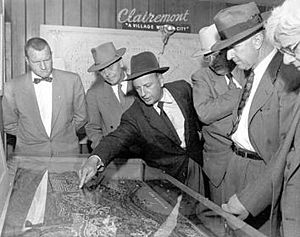 The Kumeyaay Indians came to the canyon area within Clairemont centuries ago in search of food and shelter. It was given the name Tecolote (meaning owl), after this native bird that lives in this canyon. Judge Hyde was one of the first settlers of Clairemont and began farming in Tecolote Canyon back in 1872. Farming and ranching continued in the area until World War II.

In 1887 a train depot was constructed in the vicinity of Kane Street and Morena Boulevard to accommodate potential buyers in the Morena Subdivision. It was torn down in the early 1920s.

In 1936 the Bay Park Village Subdivision was approved by the City Council. This project, located immediately south of Morena Subdivision and south of Milton Street featured 60 x 100 feet or larger lots for single-family homes.

In 1939 Bay Park Elementary School was constructed at 2433 Denver Street.

In 1950, Carlos Tavares and Lou Burgener developed what became San Diego's largest post-war subdivision. Originally dubbed "The Village Within a City", people started living in this new Clairemont subdivision in May 1951. The design of this new subdivision represented a new concept in community living because it did not incorporate the traditional grid system of uniform blocks and streets. Instead, winding streets and scenic view lots took advantage of the canyons and bluffs overlooking Mission Bay. The first homes, built by Burgener and Tavares Construction Company, had highly customized floor plans.

The developers assembled the necessary acreage to develop Clairemont from three primary land holdings: the Peavey Cattle Ranch, Mission Bay Heights (owned by the Hazard Family), and Tecolote Heights (owned by Jack & Dan Danciger). Before any homes were built in the new development, Tavares & Burgener invested $125,000 in off-street improvements including sewers, water, and access roads; this was necessary because the proposed development was not adjacent to any developed areas. The original subdivision map that used the name “Clairemont” for the first time was approved and recorded by the County of San Diego on October 16, 1950. The map was named "Clairemont Unit #1, Map #2725". This is the area in Clairemont that includes Deerpark Drive, Burgener Boulevard, and Grandview Street from Field Street to Jellett Street. According to Burgener, "Between 1952 & 1954, seven homes were constructed a day". It is also noted that Clairemont was the largest development of its kind in the country.

Within a few years, several thousand houses had been constructed, including single family homes, duplexes and apartments. Since Clairemont was somewhat removed from the city proper, commercial business and retail shopping, schools, libraries and other city amenities were designed into the overall plan. Although the concept of suburban living is commonplace today, this approach was considered novel. Tavares' vision for Clairemont had far-reaching implications for San Diego, as it stretched the city limits outward and began the now familiar pattern of migration from city to suburb.

Marian Bear Memorial Park (aka San Clemente Canyon) and Tecolote Canyon Natural Park were officially designated as parks by the City of San Diego in the 1960s and 1970s. 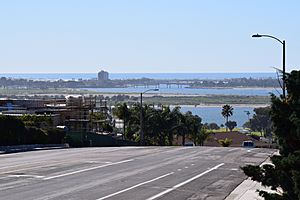 Clairemont's main geographical characteristics include mesas, canyons and streams. The predominant topographical features are the gently rolling mesas which are separated by canyons. These mesas are where most of the development is confined. Tecolote Canyon runs north-south through the center of this community. San Clemente Canyon runs east-west, bordering the community on the north side. A stream runs through Tecolote Canyon. Trails extend through the bottom of the canyons for hiking or mountain biking. The soil in Clairemont is primarily clay based. 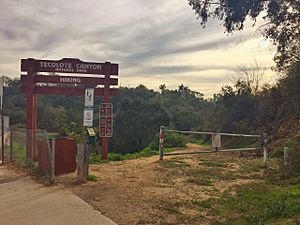 There are many public entrances into the Tecolote Canyon Natural Park. This image shows an entrance off of Genesee Ave.

Marian Bear Memorial Park - Also known as San Clemente Canyon, it was officially renamed to Marian Bear Memorial Park by the City of San Diego in 1960. Marian Park is roughly 467 acres and runs parallel to the south side of the 52 freeway. The main entrances to the park are off of Regents Road and Genesee Avenue. Both of these entrances provide public parking, restrooms and picnic benches. 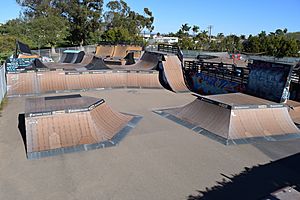 YMCA's Krause Family Skate & Bike Park - This destination park is affiliated with the Mission Valley YMCA but is located in the San Diego community of Clairemont Mesa at 3401 Clairemont Drive, San Diego, CA 92117. Skateboards, bikes, scooters, and inline skates are allowed. The large facility includes beginner, intermediate and advanced skate and BMX courses, a street area, mini ramps, a concrete pool, and the former Dew Tour vert ramp. In addition, the park houses the world's first and only Skatercross track, completed in 2016. The park is open to visitors with paid daily or monthly passes. 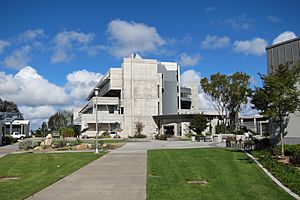 All content from Kiddle encyclopedia articles (including the article images and facts) can be freely used under Attribution-ShareAlike license, unless stated otherwise. Cite this article:
Clairemont, San Diego Facts for Kids. Kiddle Encyclopedia.