The Clark Range is a subrange of California's Sierra Nevada in Yosemite National Park. 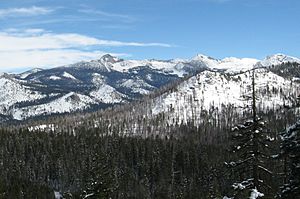 The range from the west, January 2008. Prominent peaks, from left to right, are Mount Clark, Gray Peak, and Red Peak; the bump on Clark's left side is Quartzite Peak.

A panoramic view of nearly the entire Clark Range, as shot from the summit of Vogelsang Peak just after 9am in late June

Metamorphic rock composes most of the Clark Range, with the granite of Mount Clark's summit being the main exception.

All content from Kiddle encyclopedia articles (including the article images and facts) can be freely used under Attribution-ShareAlike license, unless stated otherwise. Cite this article:
Clark Range (California) Facts for Kids. Kiddle Encyclopedia.