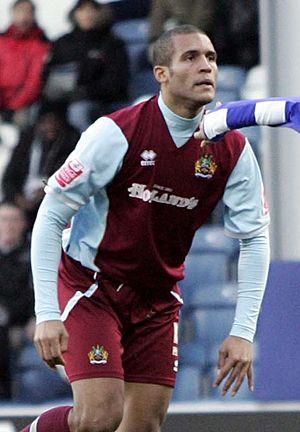 Carlisle playing for Burley in 2009.

Clarke James Carlisle (born 14 October 1979) is an English former footballer. He played as a defender between 1997 and 2013. He played for many teams including Blackpool, Queens Park Rangers, Leeds United, Watford and Burnley.

Carlisle was born in Preston. He is of Dominican ancestry. He has three children.

All content from Kiddle encyclopedia articles (including the article images and facts) can be freely used under Attribution-ShareAlike license, unless stated otherwise. Cite this article:
Clarke Carlisle Facts for Kids. Kiddle Encyclopedia.