The Cleveland Barons were a professional ice hockey team in the National Hockey League (NHL) from 1976 to 1978. They were a relocation of the California Golden Seals franchise, which had played in Oakland since 1967. After only two seasons, the team merged with the Minnesota North Stars (now the Dallas Stars). As a result the NHL operated with 17 teams during the 1978–79 season. 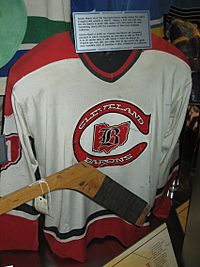 As of 2017, the Barons remain the last franchise in the four major North American sports leagues to cease operations

All content from Kiddle encyclopedia articles (including the article images and facts) can be freely used under Attribution-ShareAlike license, unless stated otherwise. Cite this article:
Cleveland Barons (NHL) Facts for Kids. Kiddle Encyclopedia.