The climate of Allentown, Pennsylvania is classified as being in the transition between a humid continental and humid subtropical climate (Köppen Dfa/Cfa, respectively), although lying closer to the former. Allentown's warmest month (on average) is July with a daily average temperature of 73.4 °F (23.0 °C) and the coldest month (on average) being January with a daily average of 27.8 °F (−2.3 °C). The average precipitation of Allentown is 45.35 inches (1,152 mm) per year. Allentown occasionally has some severe weather, mostly thunderstorms and flooding. Winters can bring snow, with some years receiving very little of it while others seeing several major snowstorms (often Nor'easters). Winter also brings the more dangerous ice, sleet, and freezing rain, which has caused several traffic accidents over the years. Tropical storms and hurricanes occasionally survive up the coast of the Atlantic Ocean and cross into Pennsylvania. Storms such as Hurricane Ivan and more recently Hurricane Sandy have caused light to severe damage in the area. 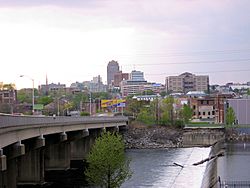 Summers in Eastern Pennsylvania are hot and very humid, with temperatures in the mid-80s and low-90s. The average high temperature peaks at 84 °F (29 °C), but highs can often surpass that, with the all-time record high standing at 105 °F (41 °C). Humidity is often around 80 percent, which is a drastic change for someone living in the Southwest United States. Rain is common, and is often accompanied by strong or severe thunderstorms. These will cause quite a large amount of rain, but they do not last long at all. Air conditioning is popular among most households in the summer months, because high temperatures and high humidity can make the air feel much warmer than the actual temperature.

Autumn is fairly mild, with daytime temperatures in the 70s and 60s. Autumn brings more wind, and sometimes heavier rainfall. Trees begin to lose their leaves before the cold winter season. Indian summer may occur.

Winters are cool to cold, with January's high temperature at 35 °F (2 °C). The highest temperature recorded was 76 °F (24 °C) in February, 87 °F (31 °C) in March, and 72 °F (22 °C) in both December and January. Snowfall is common, with amounts varying greatly between seasons. Snow, ice, sleet, and freezing rain can cause road problems and school closures. A couple years ago in February, I-78 was closed just west of the city. Drivers were stranded on the stretch of highway for as much as 18 hours, with overturned tractor trailers blocking the way. Winter sports are popular, such as snowboarding and skiing, and they can be enjoyed in the Pocono Mountains, just north of the Lehigh Valley.

Spring is a season of growth, with new grass growing and flowers blooming. Animals come out of hibernation, and sun fills the city and its surroundings. Temperatures are on the rise, but March and April bring much rain, with light rain that can last for hours on end. That gives way to warm May and June months, and shore weather is in the forecast for many residents.

Hurricanes, Tropical storms, and Tropical Depressions are all summer threats. Severe thunderstorms are an even bigger threat, and can cause flash flooding. When flash flooding occurs, mudslides are rare but are possible. Tornadoes and earthquakes are not common, but they have been reported. Blizzards have happened, but usually once every ten or fifteen years.

All content from Kiddle encyclopedia articles (including the article images and facts) can be freely used under Attribution-ShareAlike license, unless stated otherwise. Cite this article:
Climate of Allentown, Pennsylvania Facts for Kids. Kiddle Encyclopedia.