Clintonia umbellulata, commonly known as white clintonia or speckled wood-lily, is a species of flowering plant in the lily family Liliaceae. The specific epithet umbellulata means "umbelled," which refers to the shape of the plant’s inflorescence. 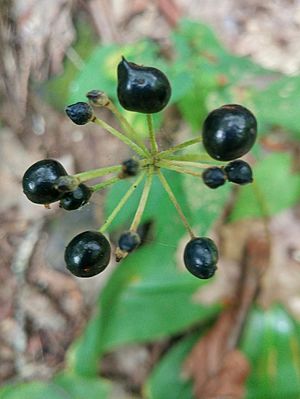 Because of their proximity, C. umbellulata and C. borealis are often confused. The following table compares the two species character by character (with diagnostic characters emphasized):

Based on morphological characters alone, bare-leaved Clintonia is generally difficult to identify, but flowering or fruiting plants are readily distinguishable.

C. umbellulata has numerous look-alikes. For example, the inflorescence of the small white leek (Allium tricoccum) is very similar in appearance. To distinguish the two, look at the leaves. The leaves of A. tricoccum have usually wilted by the time the plant is in full bloom while the leaves of C. umbellulata remain throughout the summer months.

In 1803, André Michaux described the species Convallaria umbellulata Michx., a name that was to become a synonym for Clintonia umbellulata (Michx.) Morong. The latter was first described by Thomas Morong in 1894.

In 1933, John Kunkel Small described the segregate species Xeniatrum umbellulatum, a distinction that did not persist. Numerous other synonyms are in use. Perhaps the best known is Clintonia alleghaniensis Harned, which unlike C. umbellulata has ultramarine blue (not black) fruit. It is known to occur at a number of sites in Virginia, Maryland, and West Virginia.

Clintonia umbellulata is endemic to the Appalachian Mountains in the eastern United States, from New York to Georgia. Counties where the species is known to occur are listed below:

The range of C. umbellulata apparently overlaps with that of C. borealis throughout the Appalachian Mountains. (Counties where both species are known to occur are shown above in bold.) Actually C. umbellulata and C. borealis are allopatric, that is, the ranges of the two species do not significantly overlap but are immediately adjacent to one another.

C. umbellulata is globally secure, rare and imperiled in New York, and endangered in Ohio.

All content from Kiddle encyclopedia articles (including the article images and facts) can be freely used under Attribution-ShareAlike license, unless stated otherwise. Cite this article:
Clintonia umbellulata Facts for Kids. Kiddle Encyclopedia.