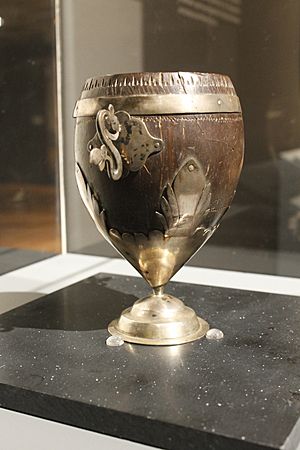 The coco chocolatero cup was used in some countries during the colonial period in the Americas.

The coco chocolatero was a cup used to serve small quantities of beverages (such as chocolate drinks) between the 17th century and the 19th century in countries like Mexico, Guatemala and Venezuela. It was made of coconut shell, hence its name.

During the Viceroyalty of New Spain, the elaboration of this object was possible thanks to the adaptation of the natural coconut palms from the Pacific islands in other territories. The hard shells of the coconuts were cleaned and cut to be polished. Then, the shells were carved with a burin, decorated with lavish geometric figures, and mounted in complex polished silver works.

The process of elaboration was carried out in two phases: in the first place, the coconut was curved and decorated with metal, shell and semiprecious stone applications. Later, the object was mounted in silver, forming a pedestal where the name of the owner, the year, and the place of the manufactured was written. These objects were manufactured in the Americas and different places of Europe, including Germany, Spain and France.

All content from Kiddle encyclopedia articles (including the article images and facts) can be freely used under Attribution-ShareAlike license, unless stated otherwise. Cite this article:
Coco chocolatero Facts for Kids. Kiddle Encyclopedia.