Comet is a town in the Central Highlands Region, Queensland, Australia. The town is located on the Capricorn Highway, 859 kilometres (534 mi) north west of the state capital, Brisbane. At the 2006 census, Comet and the surrounding area had a population of 233. 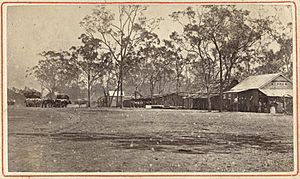 Comet is the oldest town in the Emerald region, established at the confluence of the Comet River with the Nogoa River. Originally called Cometville, the town takes its name from the river, named by explorer Ludwig Leichhardt who made observations of Comet Wilmot (C/1844 Y2) in the area on 29 December 1844. Comet is home to a "dig tree" established by Leichhardt to indicate to others where he had buried food and journals.

Today, the area around Comet supports cotton and grain production as well as cattle feedlots.

All content from Kiddle encyclopedia articles (including the article images and facts) can be freely used under Attribution-ShareAlike license, unless stated otherwise. Cite this article:
Comet, Queensland Facts for Kids. Kiddle Encyclopedia.