Constitutional status of Orkney, Shetland and the Western Isles facts for kids 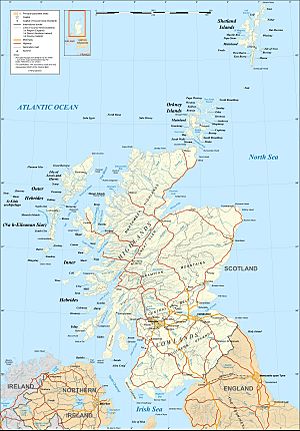 The island groups of Orkney, Shetland and the Western Isles are all currently regions of Scotland. Their constitutional status has periodically been discussed, for example during the Scottish independence referendum campaign. Currently, they are council areas with the same constitutional status as the other 29 local government areas. The three island councils are the only local authorities among the 32 in the country where independent councillors form a majority.

In July 2013, the Scottish Government made the Lerwick Declaration, establishing a ministerial working group to examine decentralising powers to the three island council areas.

Orkney and Shetland had from the 10th century been annexed by the Kingdom of Norway, which later entered a personal union with the Kingdom of Denmark. In 1468, Orkney was pledged by the Norwegian king Christian I as security against the payment of the dowry of his daughter Margaret, betrothed to James III of Scotland. The following year he pawned Shetland to the Scottish Crown which has since refused to accept repayment and return it. After the Acts of Union of 1707 Orkney, Shetland and the Western Isles, along with the rest of Scotland, became part of the Kingdom of Great Britain.

In a meeting of the island councils in March 2013, leaders of the three local authorities discussed their future in the event of Scottish independence, including whether the islands could demand and achieve autonomous status within either Scotland or the rest of the UK. Among the scenarios proposed were achieving either Crown Dependency status or self-government modelled after the Faroe Islands, in association with either Scotland or the UK. Steven Heddle, Orkney's council leader, described pursuing Crown Dependency status as the least likely option, as it would threaten funding from the EU, which is essential for local farmers. Alasdair Allan, MSP for the Western Isles, said independence could have a positive impact on the isles, as "crofters and farmers could expect a substantial uplift in agricultural and rural development funding via the Common Agricultural Policy if Scotland were an independent member state of the EU".

In July 2013, the Scottish Government made the Lerwick Declaration, indicating an intention to decentralise power to the three island council areas. In November 2013, the government made a commitment to decentralise further powers to Orkney, Shetland and the Western Isles in the event of independence. Steven Heddle called for legislation to that effect to be introduced regardless of the referendum result.

In 2017 the Scottish Government introduced an Islands bill to make "island proofing" (including for uninhabited islands) a statutory requirement for public bodies. The Bill completed Stage 1 on 8 February 2018.

In the 1979 Scottish devolution referendum, the Orkney and Shetland Islands council areas had the two highest proportions voting against devolution. The Western Isles voted in favour.

In the 1997 Scottish devolution referendum there were two questions, the first on whether there should be a Scottish Parliament, and the second whether the parliament should have tax raising powers.

On the first question, along with the rest of the country, the electorate in all three areas voted Yes. On the second question Orkney was one of only two areas in Scotland to vote No, Shetland narrowly voted in favour and the Western Isles voted more strongly in favour than the rest of Scotland.

Some islanders called for separate referendums to be held in the islands on 25 September 2014, one week after the Scottish referendum. In March 2014, the Scottish Parliament published the online petition it had received calling for such referendums, which was supported by Shetland MSP Tavish Scott. The referendums would ask islanders to choose from three options: that the island group should become an independent country; it should remain in Scotland; or (in the event of Scottish independence) it should remain in the UK.

The third option would implement the conditional promise made in 2012, when an SNP spokesperson said that, in the event of Scottish independence, Orkney and Shetland could remain in the United Kingdom if their "drive for self-determination" was strong enough. Politicians in the three island groups have referred to the Scottish referendum as the most important event in their political history "since the inception of the island councils in 1975." Angus Campbell, leader of the Western Isles Council, said that the ongoing constitutional debate "offers the opportunity for the three island councils to secure increased powers for our communities to take decisions which will benefit the economies and the lives of those who live in the islands".

A report by Tavish Scott and the Orkney MSP Liam McArthur, submitted in response to the UK government's consultation on the independence referendum put forward the idea that the Shetland and Orkney islands could remain a part of the United Kingdom in the event of Scottish independence or potentially pursue independence themselves.

Early in 2013, an opinion poll commissioned by the Press and Journal found only 8% of people in Shetland and Orkney supported the islands themselves becoming fully independent countries and completely separating from Scotland, with 82% against.

The day before the Scottish independence referendum in September 2014, Alistair Carmichael, the MP for Orkney and Shetland, suggested that if Shetland were to vote strongly against independence but the Scottish national vote was narrowly in favour, then a discussion would have to begin about Shetland becoming a self-governing Crown dependency outside of independent Scotland, similar to the Isle of Man. He stated that he did not want such circumstances to arise, "and the best way to avoid this was to vote no in the referendum."

The Orkney and Shetland Movement, a coalition of independence movements in Orkney and Shetland, contested the Orkney and Shetland constituency in the 1987 general election. It saw as its models the Isle of Man and the Faroe Islands, an autonomous dependency of Denmark. The Scottish National Party chose not to contest the seat to give the movement a "free run". Their candidate, John Goodlad, came 4th with 3,095 votes, 14.5% of those cast, and it did not stand in any subsequent election. The Movement took part in the 1989 Scottish Constitutional Convention.

A movement called Wir Shetland was launched in October 2015 to secede from the rest of Scotland in favour of becoming either a Crown Dependency or a British Overseas Territory, as a means of achieving greater autonomy for the Shetland Isles.

In September 2020 the Shetland Islands Council voted in favour of exploring options for "financial and political self-determination", stating that the islands' reliance on Scotland was "seriously threatening the prosperity, and even basic sustainability, of Shetland as a community."

All content from Kiddle encyclopedia articles (including the article images and facts) can be freely used under Attribution-ShareAlike license, unless stated otherwise. Cite this article:
Constitutional status of Orkney, Shetland and the Western Isles Facts for Kids. Kiddle Encyclopedia.