The Convention Center District is an area in southern downtown Dallas, Texas (USA). It lies south of the Government District, north of the Cedars, west of the Farmers Market District, and east of the Reunion District.Visitdallas is contracted by the City to attract conventions although an audit released in January 2019 cast doubts on its effectiveness. 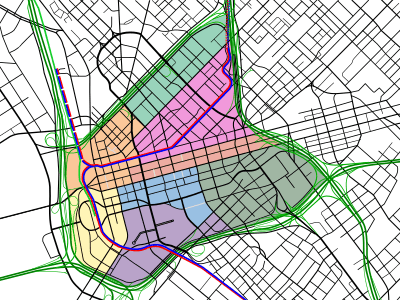 All content from Kiddle encyclopedia articles (including the article images and facts) can be freely used under Attribution-ShareAlike license, unless stated otherwise. Cite this article:
Convention Center District, Dallas Facts for Kids. Kiddle Encyclopedia.